This week in the garden 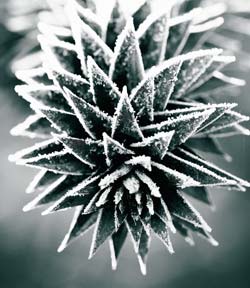 The Big Freeze continues, with large swathes of Wales and much of the south-east joining Scotland and the north-east in the coldest start to December for... well, it depends where you live, but definitely a very long time. RHS Garden Harlow Carr in Yorkshire became the latest winter garden forced to close its gates this week – though their gardeners (and visitors?) are made of stern stuff and they reopened yesterday.

Meanwhile National Tree Week has kicked off the tree-planting season with volunteers braving the snow to put in thousands of saplings at events from Bristol to Cheshire to Watford. The government also announced its Big Tree Plant: the target is a million trees planted in streets, parks and gardens to boost the number of trees in towns and cities.

Some pointed out the irony, given government plans to sell off vast tracts of the country's woodlands: but it'll certainly help the Natural History Museum whose project to identify and record urban trees is among the biggest UK tree surveys ever carried out.

Elsewhere on the web...

It's been glitz and glamour all the way this week. First the winners were announced in Martyn Cox's OMG Awards: take a bow, Cleve West and Matthew Wilson (sharers of the Most Snoggable Male award) and James Alexander-Sinclair, who effortlessly scooped the title of Best Dressed Gardener.

All that was but an appetiser for the real Garden Media Guild Awards, the gardening world's equivalent of the Oscars. Ken Crowther of BBC Radio Essex walked away (for the second year running) with Local Radio Broadcast of the Year; Lia Leendertz was 'thrilled' and 'smiling in slight disbelief' to win the Blog of the Year Award for Midnight Brambling; while Victoria Summerley carried off the Journalist of the Year Award. Congratulations to all: a full list of winners can be found here.

And that's not all: the long-awaited next episode of the Internet Phenomenon that is 3 Men Went 2 Mow is hot off the press (or whatever it is when it's a Youtube video): this time they're at Kew talking (intermittently) about autumn leaves. Enjoy.

When it's this cold, gardeners have little option but to stay indoors. So make the most of the enforced R&R by listening to some of our most inspirational gardeners talking about what they do best.

In Essex, plantsman Roy Lancaster discusses a lifetime of wandering around on mountainsides looking for plants at Writtle College on Tuesday; while on Wednesday Nigel Dunnett of Sheffield University, whose urban meadow plantings have transformed many a housing estate, turns his attention to rain gardens for the University of Bath Gardening Club.

Hardier types can improve their winter planting with a study morning on Tuesday at the spectacularly beautiful winter gardens at Anglesey Abbey near Cambridge, led by head gardener Richard Todd, or visit Ryton Gardens in Coventry, home of Garden Organic, offering free entry throughout December and January and, in the run-up to Christmas, live reindeer: take the kids, and don't forget the reindeer food.

Sally Nex is a garden writer and blogger and part of the BBC Gardening team.