What are you growing in your greenhouse this winter? If yours is idling away the colder months as an up-market storage shed for the summer garden furniture, you may be missing the chance to grow some of the delicious range of winter salad leaves which thrive in the extra protection under glass, as organic grower and salad leaf connoisseur Charles Dowding explains.

The first thing to do is make a note in next year's diary to get sowing your winter salad leaves in September. They need time to establish for harvesting now, in the depths of winter. Sowing dates in autumn are far more precise than in spring, and earlier sowings grow more quickly than those made later as plants run out of sufficient warmth and light to establish before winter. Later sowings in autumn just grow more slowly.

The photographs (taken towards the end of November) show some winter salads which I started off on 13th September in small plug cells in the greenhouse. Three seeds per plug were thinned to one seedling for lettuce and endive, and two seedlings for most other salads.

A month later I filled some old blue mushroom boxes with well rotted cow manure, after lining them with newspaper, and planted six or eight of each salad’s modules into them. They have grown steadily in the well ventilated, unheated greenhouse, and are now adapting to night frost which the greenhouse mitigates but does not prevent. They are all ready for harvesting some leaves.

The great thing about all these winter salad plants is their frost hardiness. Not that they enjoy being frozen, but they can certainly tolerate it. I have a cloche outdoors of salad from a slightly earlier sowing; this cloche does not keep frost out but it keeps the rain off and gives protection from most of the wind. I leave some air holes because salad plants risk rotting if they are kept humid and airless. That is worse for them than freezing. 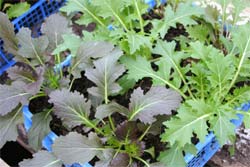 Two types of mizuna: Red Knight F1 on the left and Waido om the right

You can still make windowsill sowings in warmth: mizuna, rocket, mustards, pak choi, leaf radish, land cress, lambs lettuce, winter purslane, spinach, chard and lettuce to name some of the many possible winter salads. They won't start producing until January, but that's before you even start your spring sowings.

Looking ahead, you can also plan indoor sowings of some lettuce and spinach in January, also of peas for picking their shoots as salad.

This is a good time for ordering seeds: lettuce varieties I recommend include 'Freckles', 'Bijou' and 'Noisette'. A great spinach variety is 'Toscane' for large leaves and slow bolting, and peas for shoots are most prolific from tall varieties such as 'Alderman' and 'Tall Sugar Pea'.

Seeds for the rest of the year are also best bought now and then stored in order of sowing so that you can find them at the right time. Vegetables grow far better when sown at their best time so I recommend doing a little homework on that and making some notes.

One example is to avoid spring sowing of oriental salads such as mizuna, pak choi, mustards and also rocket, because they are then coming into their flowering season. Also they suffer more flea beetle damage in spring. So if you buy salad seed mixes, check the ingredients and sow lettuce-only mixes in late winter and spring. Wait until August and September to sow oriental leaves, for enjoying next autumn and winter.