The hot dog, beloved by American baseball fans, is probably not your idea of high-end gastronomy. But now a brave band of British charcutiers are taking the hot dog by the ears and shaking it about to unleash an artisan frankfurter that’s delicious, ethical and even healthy.

One charcutier poshing up the dog is Graham Waddington who works from his Gloucestershire workshop. He combines meat, herbs and spices into a machine known as a bowl cutter which produces the frankfurter’s characteristic silky smooth texture. “Using a bowl cutter you don’t need to add stabilisers and emulsifiers,” he says. 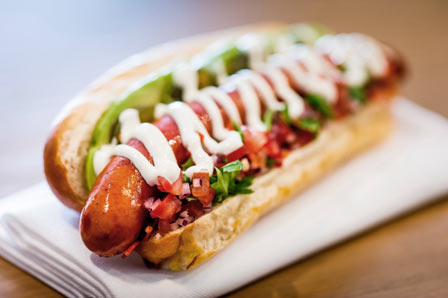 Is the dog about to have its gourmet day? Image: Bubbledogs

Unlike industrially made hot dogs which often contain as little as 30% meat, Graham’s are around 90% meat. To make his classic smoked ‘Weiner’ (Viennese sausage) he mixes rose veal with native breed pork and beef and smokes it all over beech and apple wood. Other items in his posh dog repertoire are a Strasbourg “Knack” and a truffle and porcini frankfurter. Incidentally, he prefers to call his products British frankfurters rather than hot dogs. “Hot dog denotes all manner of atrocious things,” he laughs.

Whatever you call them, Graham’s dogs have already strayed as far as London and are now being served in high-end bowling alleys and sold in department stores, enabling customers to recreate the quintessential American snack vibe at home.

Posh dogs are finding their way into smart restaurants too. This autumn a restaurant called Bubbledogs is opening in London selling just champagne and hot dogs - homemade buns, ten types of hot dog and a range of dressings that includes truffle mayonnaise. If that all sounds like gastronomic gimmickry think again. Bubbledog’s chef-owner James Knappett knows his sausages – his CV includes not only Per Se in New York, but also Noma in Copenhagen, and Marcus Wareing at the Berkeley.
“It’s about turning upside down our idea of what’s high-brow and what’s low-brow,” says Graham. “If a frankfurter is made from proper ingredients there’s no reason it shouldn’t be a great food. We’ve seen the gourmet burger hit the street and restaurants. Now it’s the dog’s turn.”

The posh dog is equally comfortable at home, whether in the kitchen or on the barbie. After you’ve boiled your frankfurters brown them in a frying pan (or on the barbecue), then add the dressing of your choice. The classic accompaniment is sauerkraut. Douse your dog with some kraut and a dollop of mild mustard and you could be in Vienna. Or clothe it with fried onions and ketchup. For a jazzed-up ketchup, make a dressing of sun-dried tomato pesto mixed with Greek yoghurt, lemon zest, chilli, garlic and olive oil.

I never thought I could fall in love with the hot dog. But I reckon the posh dog has legs. Have you tried one yet?

Hot dog round-up
Make hot dogs the centrepiece of a tasty hotpot, as in Allegra McEvedy’s recipe Hot dog hotpot.
Or try Simon Rimmer’s Corn dogs recipe for hot dogs the American way - wrapped in corn, then deep fried.
For a fantastic dressing try barbecuing onions, beer and mustard as in this recipe for Hot hounds.

How do you dig your dogs?