On Friday kids from Cape Corwall school presented their Diamond Jubilee dishes to the Queen the royal nibbles.  On the menu are traditional kids’ favourites like mini-quiches and fish and chips. But one dish that stood out was the King Charles II syllabub from the Cape Cornwall school. They chose this dish for its royal connections, saying King Charles was so fond of it that he used to keep cows in nearby St James Park. 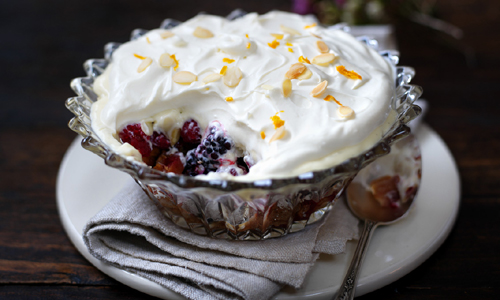 Today’s syllabub is a very easy affair, combining whipped cream with fruit juice, sugar and wine or spirits. But the texture of a traditional syllabub is very different. Served in a double handled glass, the syllabub King Charles would have supped consists of a bubbly, frothy head of milk and cream atop a clear, boozy syrup flavoured with lemon peel, mace or rosemary. Milky, sweet and frothy, was this the seventeenth century equivalent of a Frappuccino?

Presumably Cape Cornwall school did not make their syllabub "under the cow" as described in Sir Kenelm Digby’s The Closet Opened, 1669: "Take a pint of verjuice (crab apple or unripe grape juice) in a bowl, milk the cow to the verjuice..." Yes, milk the cow straight into a bucket of juice. Then drink it. (Not one to shy from extremes, this is the same cook who advocates whipping cream for an hour and a half.)

Why under the cow? The risk of cow-induced spillage and the potential for cow hairs (or worse) in your drink is bad enough. But milking the cow directly into the acidic liquid has a strange effect – the warm milk immediately curdles into think stringy clumps.

Food Historian (and syllabub obsessive) Ivan Day has tried it several times – demonstrating it for Heston Blummenthal in the 2006 series, In Search of Perfection.

Though initially sceptical, later trials had more success. The curds are strained off and the remaining whey is the active ingredient in creating a stable milk foam. Day writes, “the residual creamy whey is transformed into a wonderful cumulo-nimbus spume by beating it for a short time with extra cream, sherry and sugar. When left to rest in a cool place for a few hours, a small amount of clear liquid settles to the bottom of a high head. After twenty-four hours, the foam has set into a spongy, aerated mousse, so firm that the glass pot can be inverted without the contents spilling out.”

To avoid instant curdling, some cooks added cream to the wine and whisked it or shook it in a glass bottle before putting it ‘under the cow’. The combination of milk foam and softly whipped cream was left to stand for a few hours until the syrup separated at the bottom of the glass.

Not everyone had access to a live cow but everyone wanted that freshly milked consistency. Products to rival the most uni-purpose gadget in the modern kitchen were invented – including the wooden cow. There’s a brilliant picture of a reconstructed wooden cow at Day’s blog post on the subject plus other wonderful images of his syllabub trials.

Other cooks like Mrs Beeton relied upon gravity - climbing up onto tables to pour their warmed, flavoured cream into the wine.  A later process involved whisking the cream with a carved wooden "chocolate mill" - the Mexican molinillo - used for making cocoa. The initial froth of the whipped cream was spooned off a little at a time and placed in a fine sieve to set for up to a day. This could take hours of whisking.

The process of creating this foam is not unlike a colder version of aerating milk for a cappuccino. Barista’s divide the process into three phases: introduction of air, texturing and resting. Acid in the foam then begins to set the curd into a very bubbly sweetened mascarpone-like froth.

Here is a simple recipe if you want to have a go, from Robert May's The Accomplist Cook (1660)

"Fill your Sillabub pot half full with cider, and good store of sugar, and a little nutmeg, stir it well together and put in as much cream by two or three spoonfuls at a time, as hard as you can, as though you milkt it in; then stir it together very softly once about, and let it stand two hours before you eat it, for the standing makes it curd.”