For centuries people living along chilly northern coastlines of North America and Europe have relied on a tasty and nourishing way to combat the long winters: somewhere between a soup and a stew, thick and creamy chowder has always been a satisfying, flavourful, all-in-one comfort supper. 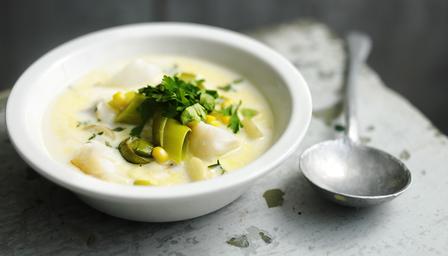 The key ingredients: fish, cream, potatoes, form the basis of many variations on the chowder theme. What’s important is that it packs a punch in terms of flavour and sustenance. This can be a great budget choice using a smaller quantity and/or cheaper fish and more vegetables. Alternatively, you can luxe it up with shellfish and saffron. For me, the main thing is that it is infinitely adaptable, quick and easy to cook, and utterly delicious – not bad for an ancient recipe. Children seem to like it too, which is always a bonus for parents attempting to get their little darlings to eat something nutritious.

New England Clam Chowder combines tasty tiny clams with pieces of salt pork, potatoes, parsley and milk into a much-loved creamy-white, warming concoction. It is a big deal in the US, with cook-offs, jealously-guarded secret recipes, and debates over ingredients (some used lobster or tomatoes). It appears to have originated as a result of east-coast Native American Indians fondness for Atlantic clams – forage food easily dug up along the shoreline – and the arrival of European settlers with their iron cooking pots (the word ‘chowder’ derives from the Latin for cauldron). The recipe for fish chowder first appeared in the Boston Evening Post in 1751 with early versions specifying the layering of ingredients, including crackers. The first mention of clam chowder was in the bestselling American Frugal Housewife (1832) and by the mid-1800s, it was a firm favourite on the eastern seaboard. I have made it with canned clams and without the pork – not authentic, but still tasty.

Smoked Haddock Chowder is the British version, probably inspired by the traditional Scottish Cullen Skink, originating from the north-east fishing village of Cullen and using Arbroath Smokies. The nice thing about this recipe is that it is eminently adaptable: to the seasons, local produce, and your pocket.

Creamy Corn Chowder is simplicity itself, cheap and quick to make. Cook an onion with a little red chili and a clove of garlic, add a large drained tin of sweetcorn (or fresh kernels) and a ¾ pint of stock simmer for 10 minutes and liquidize till smooth. Add milk or cream; salt and pepper and sprinkle on a little parsley to serve. 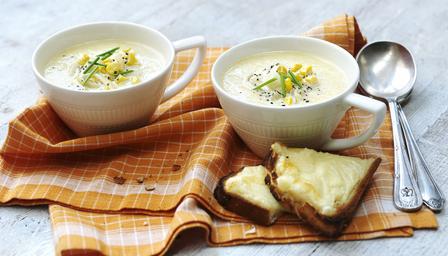 But to get back to the fishy chowders, I recently discovered some Scandinavian versions courtesy of Scandilicious’ Bergensk fiskesuppe (mussels, prawns and a dash of brandy) and Trina Hahnemann’s Skagen fish soup (prawns, fish, dill and saffron). After making and enjoying these recipes, I started experimenting adding potatoes, red pepper and garlic. What I loved about the Scandinavian versions was the addition of prawns, the zingy fresh flavour of the dill and the soothing warmth of the saffron – which also helps create an inviting, rich yellow-coloured broth. These recipes can be heavy on the cream (about 200ml), so in the interests of our waistlines, I have reduced this to just enough to make it creamy.

Scandinavian Seafood Chowder
This is not a recipe to stick to religiously. Adapt the fish quantities and types to your taste.
Serves 4

1. Gently cook the leek in a little sunflower oil for about five minutes in a heavy-bottomed saucepan, then add the garlic, tomato, red pepper and carrot and cook until softened.

2. Pour in the white wine and simmer for a couple of minutes, then add the potatoes, saffron and just enough stock to cover all the vegetables. Simmer gently for 10 minutes or until the potatoes are tender.

3. Add the prawns, salmon and haddock, simmering for a further five minutes.

4. Stir in the cream, along with the dill, salt and pepper to taste.

What kind of chowder floats your longship? Shellfish, whitefish or no-fish?