Mrs Beeton: love her or hate her?

As a food historian, I have a love-hate relationship with Mrs Beeton. I also have about 10 books with her name on (and a Mrs Beeton board game which no-one will play with me). I state I won’t cook her recipes, but I have a copy of the Book of Household Management at my right hand on my desk. It’s one of my most regularly consulted books. 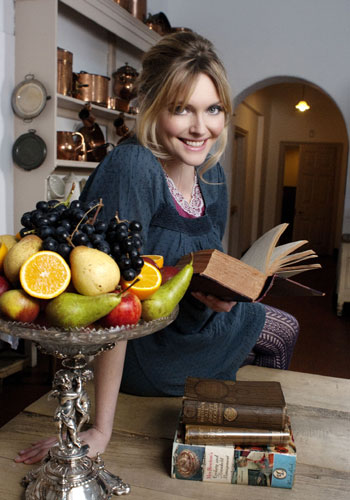 When I was asked to work with Sophie Dahl in the BBC Two special, The Marvellous Mrs Beeton with Sophie Dahl, to look at why Beeton’s book was so wildly successful, I was forced to confront my mixed feelings about Beeton’s magnum opus. Sophie works from her grandmother’s well-loved copy of the book, and we cooked a number of recipes, including pigeon pie. Carrot jam, one of my favourite recipes, also went down well. Though looking at the text again, I felt the need to warn the production team about the pitfalls in her recipes. And therein lies the problem.

It’s all about the book’s origins. Most people know this book from the largely reliable twentieth century editions. My issues revolve around the 1861 original, expanded and funked up in the 1880s. It’s a horrid, wonderful book. I love it, because, as a food historian, if I want to use an ingredient (I mean, seriously, carrot jam?! ), Beeton will have a recipe. And I hate it, because the recipe probably won’t work.

Beeton was a plagiarist, as was not uncommon at the time. To be fair, she made no claim to originality, but as a result of this, and the speed with which she compiled the book, ingredients lists contain things not then detailed in the recipe (and vice versa), methods are frequently shoddy, and every recipe needs testing before unleashing it on an unsuspecting dinner party. It’s annoying.

But I love the panache with which she does it all, and I love the encyclopaedic nature of the thing. This was an era in which middle class women became confined to the home more than ever before, geographically removed from the workplace by the growth of suburbia, and frequently poorly educated in anything beyond a smattering of French and the ability to catch a bachelor’s eye at the piano. Beeton spoke directly to them, empowering them and informing them.

For her, the mistress of the household was like ‘the commander of an army’. In Beeton’s world, dinner was war, and the book a manual on how to win it. She also understood the importance of knowing what went into your food, where it came from and how it was treated long before the current health movement. It’s all in there, and it’s written in language designed to pack a punch.

Beeton’s book is a delicious paradox. It’s enthralling and inspiring and makes you proud to be part of such a culinary heritage. I just wish the recipes worked.

So over to you, do you own Mrs Beeton’s Book of Household Management and have you cooked any recipes from it?

Annie Gray is a historic food expert and contributor to Sophie Dahl On Mrs Beeton.