What do British food markets say about us?

It’s easy to dismiss Borough market as a fancy market in the capital for foodies and tourists that has no bearing on anyone’s life anywhere else. But there is so much more to it than that, which is why we chose to look at the rise of Borough in this week’s Food Programme. With its masses of visitors passing through each weekend, often just to gape at artfully presented ingredients rather than to spend any money, it could be said that Borough is on the way to being another Covent Garden - a food Disneyland. 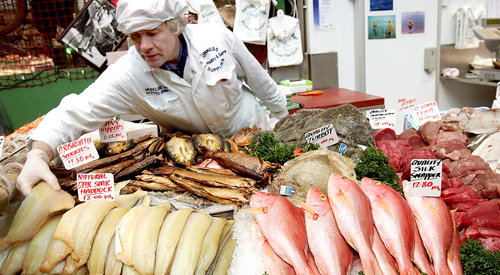 Borough was Britain’s attempt to create a market that would stand with the best of Europe - places like the Bocqueria in Barcelona or the Marche Bastille in Paris that seem to sum up the difference between continental and British food. In Britain we do supermarkets - the most powerful and profitable in the world.  Across the continent (as we’re always telling ourselves), they do it better: taking pleasure in their shopping as well as in their food, understanding that to have great food producers you need markets.

Not that Britain didn’t once have great markets: Leeds, Bradford, Bury, Bolton and Leicester (among others) still stand as grand examples of what was and what still might be if consumers could get away from the idea that markets need to be the place for the cheapest food.

In the late 90s, when Borough began its modern transformation into a food retailing phenomenon, traditional markets were has-beens and of no consequence to local or central government. Farmers’ markets were just coming to life - the first one in Bath was held in 1997, but to policy makers they were just niche add-ons for the middle classes. Town planners looked at the country’s old central market places and just saw lucrative development opportunities for supermarkets, offices, upmarket flats and chain shops.

The rise of Borough Market changed all that. Though it all started by happenstance, modern Borough turned out to be the key to reviving Southwark, one of the poorest boroughs in the country. It did it by visibly linking together the fortunes of the hard-pressed rural economy and the rich capital.

In 1996 Randolph Hodgson, arguably the saviour of English farmhouse cheeses, moved his cheese maturing and storage business to a warehouse on the edge of the old market because it was damp, cold and cheap. The market was still functioning during the night for fruit and veg wholesalers, but during the day it was a litter-strewn car park. Few people could see its charm, but Randolph did and in 1998 he asked Henrietta Green if she’d be interested in holding one of her Food Lovers‘ Fairs there. She thought he was mad, but eventually agreed. Her Christmas market packed with producers from all over Britain attracted thousands of enthusiastic shoppers. Many producers had to drive back to their farms and dairies overnight to restock for the second day.

And so it began....slowly. Dogged producers such as Peter Gott, a boar and rare breed pig farmer from Cumbria came regularly, each time bringing with him a different producer from the North West. Suddenly the lives of Cumbria’s hill farmers were transformed - they had a market. At first just once a month, then twice, but within three years it was three days a week, every week. 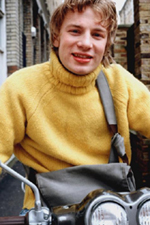 Jamie Oliver in his Naked Chef days: a fan of Borough market

As the market thrived, so did the area around it.  Local authorities all over the country sent teams to Borough to meet stallholders and management trying to understand how a food market could spur regeneration. Supermarket scouts were a common sight with their pads and pencils.  It was the Borough effect that resulted in so many big retailers now selling local food from named farmers. Glamorous chefs made Borough part of their routine. Jamie Oliver in his early guise as The Naked Chef was always buzzing off there for a load of this and that - and to this day still buys his meat (as carcasses) from Borough traders. It was sexy, of the moment, the new rock and roll.

But success on that scale has brought problems. Borough is now one of London’s main tourist attractions and that’s driven out many of the shoppers who made the market a success. And because most of the excited hordes are now not carrying shopping bags, hot food to go is a much bigger part of the market than it used to be. Rents for the shops and the big permanent stalls have risen in recent years and all but one of the wholesale traders have moved out. Some of the original traders say their relationship with the market’s management has broken down and they no longer feel like Borough’s most important asset.

So, does the market still matter?  I believe that Borough could have a meaningful future if management really engages again with its farmer/producer traders, the people who are the soul of the market. If that happens - and management and trustees say that’s their goal - then we’ll still have a capital market to compete with what the French, Spanish and Italians take for granted: a market that sets standards and provides a vital link between town and country.

So what do our markets tell us about food culture in the UK? Do we really prefer taking pictures of beautiful arrangements of food in the market, rather than cooking with these same raw ingredients? And do you think other markets in the UK are following the same pattern as Borough? Tell us about your local market.

Shelia Dillon is the presenter of Radio 4’s The Food Programme.