The history of royal wedding menus

So we now know who’s making the royal wedding cake, but we’re still guessing about the rest of Kate and Will’s wedding menu. Royal wedding feasts, as you would imagine, have always been pretty grand affairs – reaching the peak of their extravagance as extensions of the great dining halls of the early middle ages. Animals would have been raised especially for the event – with a feast foreman keeping an eye on stocks so that the food never ran out. In addition to the hundreds of guests, the workers would have had access to food in lieu of wages, a tradition that held out until the middle of the 17th Century.

Wedding feasts are famously shows of wealth and power. Highly ornamented foods such as gilded peacocks and hog’s heads were common on medieval tables, but perhaps the most imposing feature of any modern wedding is the cake. Now taken to be a representation of the bride – virginal and white – the cake in this form is a recent invention. It is a composite of several traditions that date back to when a bride cake or pie was made – again, putting the woman at the centre of the occasion. Oddly, in the southern USA, a darker, stronger tasting grooms’ cake is often made to sate the men’s appetites. 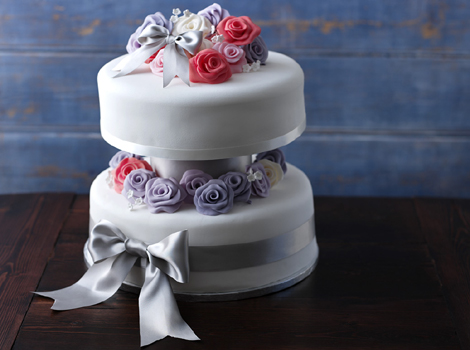 The tradition of the giant royal cake was in full swing when Victoria married Prince Albert in 1840 – one of their SEVERAL cakes weighed in at over 300lb, while that of the Duke of York and Elizabeth Bowes Lyon in 1923 was almost nine feet high. Although the opulence of these cakes is impressive, our own Queen used her cake to reach out to the commonwealth – using ingredients sent from all over the world. She sent pieces of it all over the UK – linking her subjects to her in a rather special way. Pieces of several royal cakes can still be found in various royal collections, including a piece of Victoria’s 300lb monster!

Royal wedding feasts tend to give a nod to history, often naming dishes after family. It will be interesting to see if the young couple break from this tradition in their attempts to modernise. While the present Queen Mother started her wedding feast with consommé à la Windsor, the Queen herself ended her meal with a layered ice cream bomb ‘Princess Elizabeth’.

What I think is certain about William and Kate’s wedding menus is that they will feature food grown or produced by the various Royal estates – their own version of seasonal and ‘local’. Even though the timing is out for most of the Royal gardens to be at their productive peak, British lamb is at its best in the spring, so perhaps they will plum for that as a main course? Charles and Diana did when, in 1981, they chose a lamb mousseline as a stuffing for chicken breasts. As they also had a rich starter of fish quenelles with lobster sauce, they were probably glad of strawberries and cream for dessert.

Did you celebrate the wedding of Charles and Diana, or indeed the Queen’s wedding? If so, do you remember what you ate?

Gerard Baker is a food historian and a contributor to the Hairy Bikers programmes.