How to make marmalade

Making marmalade at home is a cool thing to do, up there with baking as a skill that gives you a certain pride in conversations. Unlike our grannies, we don't have to aim to supply the neighbourhood with dozens of jars or pad out the oranges with pectin-rich carrot or turnip as they did in the war years. We can use good ingredients, make just enough for ourselves and friends, and feel rightly pleased that this little act of self-sufficiency showcases our kitchen abilities rather well.

As with bread baking, we've found out a little more about the science that creates the 'jellied set' and keeps the peel tender rather than tough. This means that making marmalade well at home is much less problematic than it used to be. So we can banish runny unset syrups and leathery peel to history. Today's marmalade should be able to sit like jelly and glisten, packed with a rich bittersweet flavour all fairly effortlessly without hours of sugar boiling. 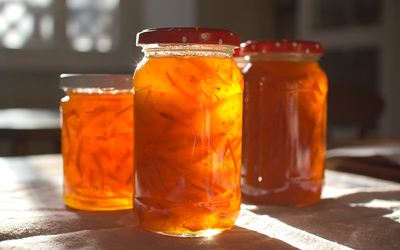 Seville oranges, the particular type of citrus fruit used in marmalade making, are rich in a natural substance known as pectin. You may have seen it in bottles at the supermarket, often made from apples or sometimes lime skins. When pectin is combined with sugar and acid - like lemon juice - and boiled to 105C/220F, it forms a suspension that sets as it cools. Cook above that temperature and you might damage the pectin, take the temperature well below that and the pectin might not gel.

But first of all you have to release the pectin from the pips and peel, mainly the white bitter part of the fruit. The longer the pips and peel sit in water the more pectin will be released. The way that preserving guru Pam Corbin, a patron and judge at the annual Marmalade Awards in Cumbria, suggests is to cut the Seville oranges in half, squeeze all the juice out, then slice the peel thinly and cover it with the juice and extra water. Leave that for 24 hours before cooking, with the pips soaking separately. Others go for cooking the oranges whole first, then leave them to cool in the water for 24 hours, before removing the oranges and shredding the peel.

My recipe for medium-cut Seville orange marmalade explains how to get the proportions of oranges to liquid and sugar right. My mum would measure it to the eye and get it correct most times, but then she's a marmalade machine. If you're like me, only making it occasionally, then weighing and measuring is the best way.

I advise keeping the boiling time short. First it avoids damaging the pectin. Second, if you boil the sugar and peel for a long time you are more likely to harden the fibres and make the peel tough. But the other reason is when you boil sugar and an acid together for a long period you cause the sugar to "invert" and this can affect the set. The acid of the lemon is essential for creating the pectin set, so if you add less the gel may not form and the flavour will be too sweet.

It's essential to have a big enough pan. When everything is in the pot, it should be filled halfway up, no more, so that when it boils up the mixture stays in the pan, and doesn't boil all over your hob and risk scalding your hands. Treat yourself to a large marmalade pot, often called a maslin pan, or cook the marmalade in smaller batches. Boiling hot marmalade will burn if it hits your skin, so better to be careful.

When it comes to testing the set, I've never had much luck with getting marmalade to set on a saucer in the fridge, or getting it to drip in sheets from the spoon. If you haven't got the mixture right to begin with no amount of continuous boiling will make it set. Though you could leave it to cool, add liquid pectin and bring it to the boil again. Tiptree make a tawny marmalade that is cooked twice, so you'd be in good company.

Once you've made marmalade once, you almost won't need a recipe. Afterwards, anything from marmalade sponge pudding with cardamom custard to a marmalade Martini will have that touch of pride mixed with it.

So tell me, have you made marmalade this year? And do you have any tips to share?

Dan Lepard is a food writer for the Guardian and a baking expert.