The ultimate recipe for golden turkey

Yes, we really are going to cover a whole turkey in real gold...

Let’s face facts, lovely people: Christmas lunch is the most important single meal of the year for most Britons, but often it’s the most gruesome and predictable. If I eat one more dull overcooked turkey with obliterated Brussels sprouts I’ll...well...I’ll sit there miserable as sin, wondering why we eat turkey every year, like everyone else.This is why I’ve come up with a wondrous extravaganza of a dish that you and your family will NEVER forget... 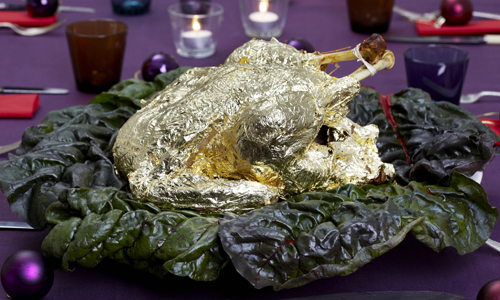 And the best bit of it all: there’s still turkey involved (I’m adventurous, not bonkers). The difference is my turkey is a) not overcooked and b) GOLDEN. Hoh, yes! Is it a wild extravagance to gild a turkey? Well, the gold costs about the same as a bottle of cheap Champagne. So, yes, it’s not cheap, but I think it’s a small price to pay for a Christmas lunch that you’ll never forget. Gold is perfectly safe to eat: it’s food additive E175 for anyone who was watching my last TV series! It passes straight through you and doesn’t taste of anything - other than pure magic.

For maximum effect it’s best to do this secretly and only reveal what you’ve done when the turkey hits the table.

So how hard is it to do? Well, the one in the photo took me about 15 minutes to gild using a combination of loose leaf and transfer leaf, although I have used gold leaf a fair bit, so it may take you longer. You need a booklet of gold at least 23ct or above, and you can get it cheaply from retail or online art shops - or expensively from edible gold leaf suppliers. It usually comes in booklets of 25 x 80x80mm leaves in either loose leaf (which works best) or transfer leaf (where the leaf sits on a piece of paper). One booklet is just enough to do a 4kg/8lb 11oz bird if you manage to do it without too much wastage. Keep any spare gold for knocking up golden sausages and mash another time.

First, roast your turkey, but please don’t overcook it - all that stuff about turkey needing five hours to cook is utter rubbish, and is the reason why everyone thinks that turkey is dry and ‘orrible. A smallish unstuffed room-temperature 4kg turkey takes only two hours (really, it does) and a large 7-8kg/16-18lb one takes three hours. The 4kg one in the photo took two hours exactly at 180C/350F/Gas 4 and it was perfect. Roast it upside down for the first 1½ hours and turn it over for the last 30 minutes - this will keep it as succulent as possible.

Let the turkey rest for an hour – it won’t go cold, but will cool down enough for you to be able to gild it. Then sit yourself in a nice calm place without any wind, and take your gold out. Start with the breast of the turkey, and as long as you’ve done that thoroughly, the rest of the bird is a bonus!

If you’ve got loose gold leaf (that’s the best sort), the technique I’ve developed is to hold the booklet firmly so that the gold leaves don’t all slip out (it’s so thin that it floats away very easily, even on your own breath), then open each page gently and press the gold from the booklet straight onto the bird. Use a dry brush to dab it into place if you need to, around legs and crevices. It takes a couple of goes to get right, but then it’s dead easy. Just keep going until you’ve covered the whole bird.

Transfer gold leaf is great, but can give a slightly patchy effect, rather than the appearance of pure golden turkey. The transfer leaf is the easiest to use – you just need to press it against the slightly fatty skin and the gold should come away from the paper. It may need a little help with the back of a fingernail to help it, and if your gold is particularly sticky, you may need to dampen the skin of the turkey with an extra little bit of oil or a very light smear of butter. Once you’ve gilded the turkey as best you can, serve it with your favourite veg.

Are you going to fly in the face of austerity and give the Midas touch to your turkey? Or do you think that a golden turkey is an extravagance too far, even at Christmas? How will you be cooking your turkey this year?

Stefan Gates is a BBC presenter and food writer.