The Brazilian Grand Prix looks like being a straight fight between Rubens Barrichello and Mark Webber.

The drivers in the top 10 shoot-out are not allowed to refuel between qualifying and the race, so their pace is dictated by how much fuel they have on board.

And once the weight of fuel in the cars in the final session is taken into account, Red Bull's Webber emerges as the fastest man in the field, with pole-man Barrichello second, albeit by a margin of only 0.056 seconds.

Qualifying was held in the wet, and forecasts for the race are mixed. But it is still possible to draw a sense of who might be in best shape for the race.

Judging by the cars' relative pace in the little dry running that has been possible at Interlagos this weekend, the Red Bull is expected to be faster than the Brawn.

And with Webber fuelled to do two more laps than Barrichello, the Australian has the chance to jump the Brazilian at the pit stops.

Either way, those two have to be considered the hot favourites for race victory as it is difficult to see any of the drivers immediately behind them having the pace to challenge them, whether it is wet or dry. 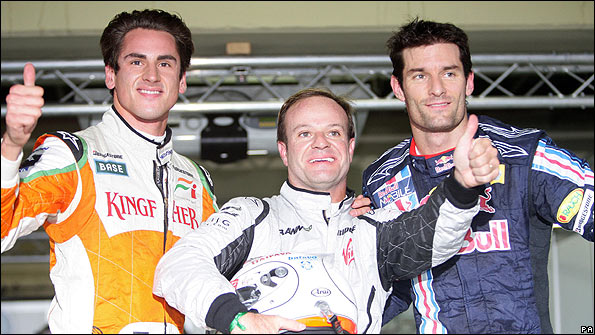 The fuel-adjusted top 10, with predicted first pit stop laps, looks like this:

In terms of the championship battle, then, that is good news for Barrichello and terrible news for Jenson Button, who is down in 14th on the grid.

Barrichello heads into the race 14 points adrift of Button, and must make up at least five points on his team-mate to keep his title hopes alive going into the final race in Abu Dhabi in two weeks' time.

On the face of it, his chances of that look pretty good - Barrichello's hopes of scoring at least eight points, for second place, are strong, with 10 for the win. If Barrichello is second, Button would need to finish at least fifth to win the title - a difficult job from that far back. And if the Brazilian wins, the Englishman would have to be third.

Realistically, then, Sunday's race will be yet another exercise in damage limitation for Button - but then he's been getting rather a lot of experience in that in recent races.

Two places behind him, things are more clear-cut for the final title contender, Webber's team-mate Sebastian Vettel. With a 16-point deficit to Button, he has to score seven more points than Button just to keep his hopes alive. The German has no choice but to simply throw caution to the wind and go for it.