Ted Kravitz - the Belgian GP from the pit lane

Kimi Raikkonen has done what he said he would do all season - win a race. One has the feeling that, in his mind, his targets have been achieved for the season.

The win was a massive relief for Ferrari. To have not won a race all season would have been unacceptable. 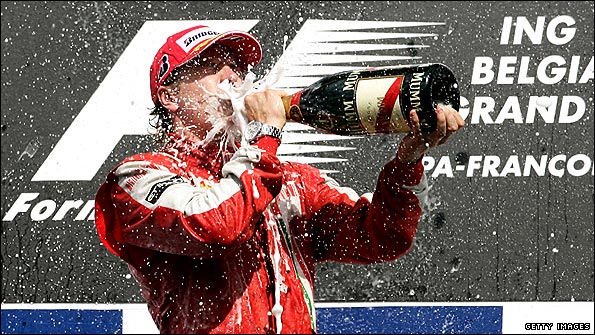 As for Luca Badoer, it was the Ferrari team radio broadcast during Friday practice that summed up his F1 return.

You'd have thought a professional racing driver would know where he was doing well or losing time. But with the help of telemetry, Rob was able to give real-time driver coaching:

Smedley famously helps Massa with the driving, too, but it tends to happen in the debrief between sessions, not when he's out on the track.

In fairness, after the race, both Stefano Domenicali and Chris Dyer paid tribute to how tough the job was and how well Luca Badoer had done on such short notice. It sounded like a farewell.

I fear there may be a possible five-place grid penalty in Rubens Barrichello's near future.

Thanks to an oil leak, his car was properly on fire as it came into parc fermé after the race. He had a new gearbox and a new engine fitted on Saturday morning. 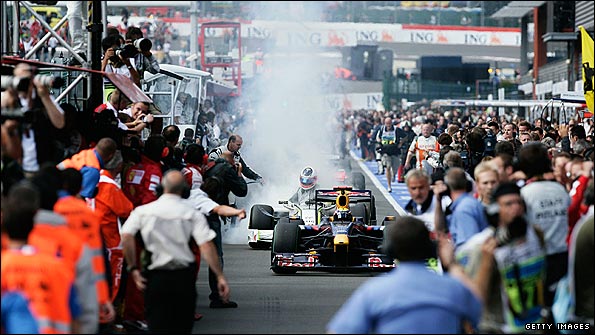 Brawn are now assessing the damage caused in Belgium and will make a decision after running it on Friday at Monza whether they need to change the gearbox again.

Since he finished the race in the points, the rules say Barrichello must use the same gearbox for the next three races. Any change would incur a five-place grid penalty.

In many ways, that would be as good for Button's world championship hopes as seeing Vettel score the most points out of the Belgian weekend.

Indeed, Spa was the second race in a row where the fourth-placed driver in the championship picked up the most points of the title contenders. So with another race gone, Button's championship prospects don't look too bad.

Team boss Christian Horner and team adviser Helmut Marko had a very public discussion with Mercedes boss Norbert Haug in the paddock on Saturday, just in case anyone wasn't aware that Red Bull are chasing a supply of Mercedes-Benz engines.

Red Bull's problems with their existing Renault engines, and the number of failures they have been suffering, are having an ever-greater effect on their championship. 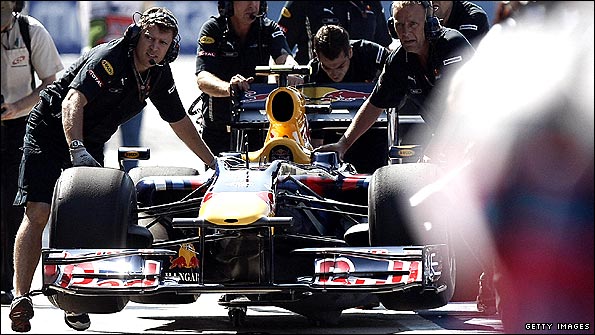 Not only will Vettel have less time to practice and find a good race set-up on Fridays because of his limited engine running, but there was also an engine scare during the race on Mark Webber's car.

We heard a team radio message telling Webber to stay off the kerb at Eau Rouge.

Horner confirmed after the race that this was related to some spikes in oil pressure that they had seen on the telemetry that could lead to further engine problems.

Taking a smoother line through Eau Rouge seemed to solve the problem.

The prospect of Kimi Raikkonen returning to McLaren seems to be one of the more plausible outcomes of the driver market.

Many people at McLaren still love Raikkonen; in many ways he's the perfect McLaren driver.
For a team that grounds their engineering in pure mathematics and physics, to have an unemotional, repetitive - almost robotic - driver in the car is much easier than having a man who is inconsistent and variable.

You'll never be able to prove anything with an inconsistent driver, because you'll never know if what you're changing on the car is working.

McLaren engineers still talk with wonder about Raikkonen's consistent lap times. He was so good, they say, because he would come back to the pits, say what was wrong, they would fix it and he would go out and go faster. Simple.

He also said the team wanted to employ the two best drivers they could, despite the problems they had with Hamilton and Alonso two years ago.

Raikkonen only left McLaren because his relationship with then-team boss Ron Dennis deteriorated when he signed Fernando Alonso. Is history repeating itself at Ferrari?

How Lewis Hamilton would feel about having Raikkonen in the other McLaren is another matter.

As a matter of interest, in the McLaren post-race press release, every quote - with the exception of Hamilton's - praises Kimi for his win.

Given that most McLaren people would rather undergo root canal surgery than publicly praise Ferrari, one can't help thinking there's a bit of 'preparing the ground' going on here.