McLaren were always expected to be strong at the Italian Grand Prix and the fuel-corrected qualifying times emphasise just what good shape they are in for the race.

The drivers who are in the top-10 shoot-out are not allowed to refuel after qualifying, so once the weights of the cars are revealed it is possible to work out who was genuinely the fastest man in qualifying - as well as the lap on which they are likely to make their first pit stop.

At Monza, that honour went to McLaren's Heikki Kovalainen. Having qualified an impressive fourth with a heavy fuel load, the Finn is therefore in theoretically the strongest position to win the race. But the Brawn drivers also look to have a very strong chance - and if the Mole was to stick his neck out and make a prediction, it would be to make Button the favourite for victory. But we'll come back to that in a minute.

The first thing that strikes one about that list is just how close it is between the major contenders. Only 0.073 seconds separates the top four drivers on fuel-adjusted times. And that makes predicting a likely winner very difficult indeed.

On paper, a two-stop strategy (Hamilton, Sutil and Raikkonen) is marginally faster - but in practice stopping only once is often the best way to run a race at Monza. 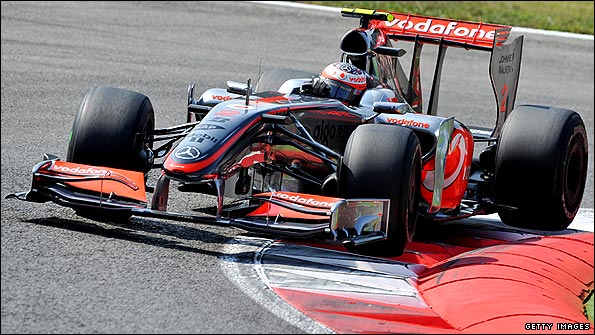 Heikki Kovalainen is on fuel-adjusted Monza pole but can he convert that into a win?

Hamilton needs to make the most of what is likely to be a clear track in front of him by pressing on as hard as he can in the opening stages of the race.

He needs to make up enough time to ensure that when he emerges from his first stop anyone in front of him is going fast enough, on what by then should be a lighter fuel load, not to hold him up.

If anyone is going to make a two-stop strategy work, though, it is Hamilton.
Starting from pole, in a car fitted with the Kers power-boost system, the world champion is in the perfect place to capitalise on his team's planning.

Even so, Kovalainen is still in a very strong position. With Kers, he is likely to get ahead of Sutil's Force India at the start. And even though he may not pass Raikkonen, he should not be held up by the Ferrari in the first stage of the race.

The question mark over Kovalainen is whether he has the consistency of race pace to fulfil his potential - it has been his relatively poor performances in races so far this year that has put his position in the team under threat.

The Brawn drivers are also in a potentially very strong position to score some serious points and perhaps even win, as they made clear in their interviews on the BBC immediately after qualifying.

Barrichello and Button may only be fifth and sixth on the grid but they are both fuelled heavy - and it would be a surprise if both of them are not in contention once their single stops are out of the way.

So, why make Button the favourite? That is because of Kovalainen's inconsistent form in races and the fragile gearbox in Barrichello's car.

Certainly both Brawn drivers have a golden opportunity to effectively put some serious distance between them and their Red Bull rivals in the championship. For while Vettel and Webber are also fuelled long, they are starting far enough back that it will be difficult for them to make up the ground.

For the record, the calculated first pit stops for the rest of the field are as follows:

If team-mates are listed on the same lap, the one who is leading in the race when the stops approach tends to be given priority.