Force India's Giancarlo Fisichella sent shockwaves through Formula 1 by setting pole position for the Belgian Grand Prix - but it is Toyota's Jarno Trulli who on paper has the best chance of winning Sunday's race.

Once the amount of fuel being carried by the cars is taken into account, Trulli - who qualified second - was the fastest man at Spa-Francorchamps on Saturday. Fisichella was fourth behind Red Bull's Sebastian Vettel and BMW Sauber's Nick Heidfeld - still a stunningly good result for a team more used to being at the back of the F1 grid.

We calculate these figures by combining the weight of fuel in the cars in qualifying, the lap-time penalty for each kilogramme of fuel and the amount of fuel used by a car on a lap. The cars in the top 10 shoot-out are not allowed to refuel between qualifying and the race so their pace, and their first stop, are dictated by the amount of fuel they are carrying.

The fuel-adjusted grid therefore makes analysing how the race might pan out much easier - and in this case Trulli is clearly in the best shape to win, in that he is the fastest car closest to the front of the grid. 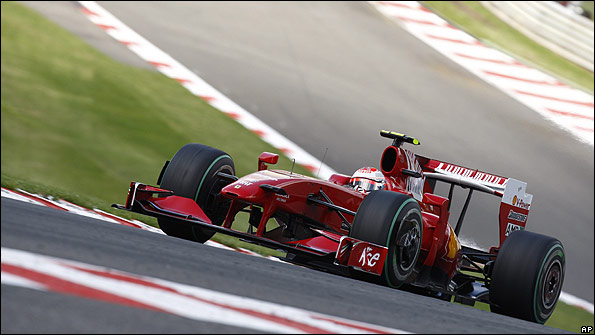 Could Raikkonen win at Spa from sixth on the grid?

This is not the first time that has happened this year - Trulli also should have won in Bahrain, where a bizarre strategy decision by Toyota scuppered his chances. With question marks hanging over their future in F1, the team are desperate to score their first victory in their ninth season in the sport.

But with the traditionally faster cars some way behind them, Toyota have never had a better chance than this to shed their reputation for being the masters of snatching defeat from the jaws of victory.

Underlining that point, the de facto second fastest man in qualifying was Vettel - but the Red Bull driver is only eighth on the grid, so he is likely to be hamstrung by spending time behind slower cars that will prevent him running at his ultimate pace. He will hope to leapfrog them by running longer than most to his first pit stop, but even so he will be doing well to overcome the handicap of starting so low down.

Heidfeld was third on the grid and on fuel-adjusted times, and this steady, consistent driver must therefore be fancied for a strong points finish.

But the man all the leading runners may be most wary of is Raikkonen in the Ferrari. He has been second and third in the last two races - both times after qualifying sixth, which is again his starting position at Spa.

There are two factors pointing towards a potentially even stronger finish for Raikkonen this time, though.

The first is that only Barrichello of the regular front-runners is in front of him - and the Brazilian is only ninth fastest on fuel-corrected times and will pit about three laps before the Ferrari driver.

The second is that Raikkonen is the only driver in the top 10 with the Kers power-boost system after the McLarens qualified 12th (Lewis Hamilton) and 15th (Heikki Kovalainen).

That should ensure Raikkonen gains several places on the first lap - he will press the button on the hill down from La Source and should be strongly placed to slingshot past his rivals on the climb to Les Combes after Eau Rouge.

For that reason, while Trulli has to be the favourite on paper, it is Raikkonen who is the Mole's dark horse for victory in the Belgian Grand Prix.