Another song to Singapore

The Mole welcomes back BBC F1 pit-lane reporter Lee McKenzie to the blog with news of an initiative to inject some extra showbiz into F1.

Thanks to Beyonce, Black Eyed Peas, NERD, ZZ Top and Simple Minds, F1 really will rock in Singapore this year.

Bernie Ecclestone launched a new initiative on Tuesday to combine the thrills of F1 with those of rock music. 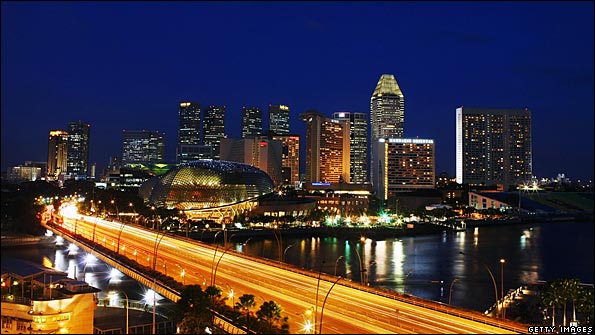 After the F1 night race has finished on 27 September, the Asian city state's stunning skyline will become the backdrop to a rock concert, with some of the world's leading artists picking up where the some of its top sportsmen left off.

The idea is to bring new audiences into F1 and create an all encompassing entertainment package, alongside a TV programme that will be broadcast throughout the world. On stage on Tuesday morning, Ecclestone appeared delighted with the announcement, although he did hold back on revealing his favourite artists, saying he was up with "all the modern music, Frank Sinatra, etc"!

F1 Rocks - the name for the new venture - will make its debut in Singapore this year but the plan is for there to be events after seven or eight grands prix next season. There was a trial show in Melbourne at the start of this season, featuring The Who, although sadly I missed it. We were still on air and I could hardly sneak off and watch some live music!

There was a time a few years ago when if you asked F1 drivers who their favourite bands were, every one of them would say either Phil Collins or Dire Straits. Times have moved on, though, and you can't imagine Lewis Hamilton coming out with that!

With Hamilton into his R&B and Toyota's Timo Glock loving heavy rock, it will be fun to see who is dancing to what when the chequered flag falls in Singapore and the party really starts!