It has become something of a custom for the Mole to bring you a round up of the off-track gossip in the aftermath of a race.

And in Istanbul the F1 rumour mill was churning in top gear ahead of the Turkish Grand Prix.

It might surprise some readers to know that one of the world's highest-profile sports is played out in such small circles, where world champions past and present blur with the media, mechanics, meal-makers and movers and shakers along the length of the paddock.

The F1 network is so tightly-knit, and at times impenetrable, that learning how to decipher fact from spin becomes a necessary skill.

Just less than two hours before Sunday's race, one voice whispered in someone's ear that the eight remaining F1 teams' association (Fota) were planning to boycott the race in protest against the FIA's proposed 2010 financial and technical regulations.

It took less than five minutes for the rumour to race from one end of the paddock to the other, to bounce up to the media centre and across to the TV compound.

If it was true then just the four cars of the Force India and Williams teams would race each other - what a dramatic twist in the ongoing battle between the teams and the sport's governing body that would be!

The potential scenario was so tempting that bets were enthusiastically being placed on Nico Rosberg to win his first GP and the Williams driver's odds tumbled.

But the rumour simply wasn't true. 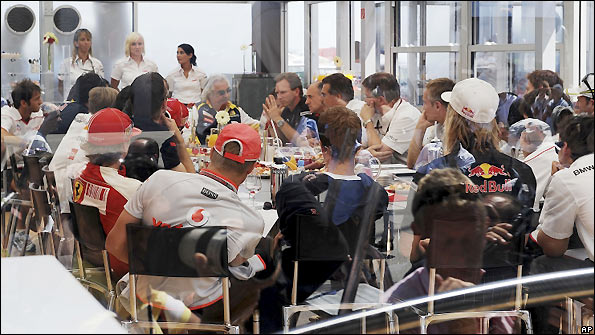 The Ferrari and McLaren spokesmen remained cool as the media mobbed them: "It's all just Alice In Wonderland stuff. There's not a grain of truth in it.

"Where do you think the story came from?" they asked provocatively before retreating behind the glass doors of their motor homes.

If the story wasn't true then how and why did the rumours start?  Why was so much time wasted chasing a story that was in the end a total non-story?

"Welcome to the world of Formula 1," said a voice of experience.

In a political battle between two parties it is not unusual for a little spin to be employed by either side to alter the public perception of their rivals.

Is that what happened in Istanbul?

On Sunday, the Fota members sat down for a breakfast meeting with the drivers to address their concerns about the future of the sport that they race in and which pays their wages.

None of the team principals wanted to elaborate on the discussions or reveal Fota's next move ahead of the FIA announcement on the successful team entries for 2010 on Friday 12 June.

With the teams remaining tight-lipped perhaps that is why the rumour mill decided that disseminating a little fiction was better than sticking to the facts.