Red Bull drivers Sebastian Vettel and Mark Webber appear to be the only men who have any chance of winning the British Grand Prix when it comes to the pure pace of their cars.

Brawn's Rubens Barrichello split the two Red Bulls on the grid, relegating Webber to third place, but once the weight of the cars in qualifying is taken into account, Vettel and Webber were first and second fastest. And Vettel's advantage over Barrichello, the fastest non-Red Bull, was more than 0.6 seconds.

The top 10 drivers in qualifying are not allowed to refuel between qualifying and race, so they must qualify with the fuel with which they will do their first stint on Sunday - which varies depending on when they will be making their first pit stops.

When the weights of the cars are taken into account, the fuel-corrected grid, with estimated first pit stops, looks like this:

So the Red Bull is well over half a second a lap quicker than the Brawn around Silverstone - a huge margin, especially considering Jenson Button had the legs of his rivals Turkey two weeks ago, taking a fuel-corrected pole position (even though he qualified second), and dominating the race. 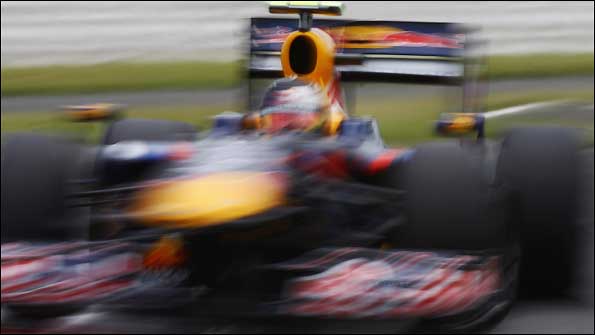 That confirms what a huge step forward Red Bull have made with their car for Silverstone, thanks to the new nose, diffuser, engine cover, rear wing and revised weight distribution. It also suggests that, assuming their form is carried over to race day, Vettel and Webber will stage a private battle for victory.

Vettel's advantage over Webber is massive on paper - but it is not representative of their true pace because the Australian's best lap was ruined when he came across the Ferrari of Kimi Raikkonen dawdling on the racing line at Stowe corner.

If anything, Webber appeared to have a slight edge on Vettel during practice, but in qualifying events transpired to make a true comparison almost impossible.

Webber was faster by 0.011secs in first qualifying, but then the truly quick cars do not have to push to the limit in that session.

Vettel, who has enough fuel to stop three laps later than Webber, was then faster in what F1 insiders call Q2, but Webber only did one run to the German's two in that session.

So, even if no-one else is likely to get a look-in, an intriguing battle is in prospect between the two Red Bulls.

Behind them, Barrichello looks locked-on for third place, all things being equal, and championship leader Button faces a tricky afternoon from sixth on the grid.