It's official - Jenson Button was the fastest man around Monaco on Saturday regardless of fuel load.

The Englishman was on pole position for the fourth time in six races this year, and he was also the fastest man once the weight of fuel on board the cars is taken into account.

The cars in the top-10 shoot-out are not allowed to refuel between qualifying and race, so they go into qualifying with differing fuel loads depending on how long their first stint in the race is going to be. 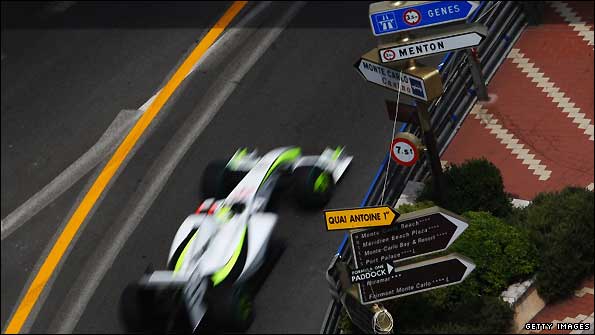 A Formula 1 car uses between 1.7-1.9kg of fuel per lap of Monaco depending on the car, and each kilo of fuel slows it down by about 0.025 seconds.

Once those figures are computed, it confirms what a superb job Button did in qualifying. He was 0.025secs quicker than Ferrari's Kimi Raikkonen in actual time - but the Brawn had two laps more fuel on board and Button's margin to the Finn extends to 0.113secs once that is taken into account.

The fuel-adjusted top 10, with estimated first pit-stop laps, looks like this:

Looking at that, the obvious conclusion is that Button is a hot favourite to win the race, as long as he does not get jumped by Raikkonen on the first lap.

That, though, is a real possibility given that Ferrari are running the Kers power-boost and energy storage system in Monaco. So Button will have to be very defensive on the run from the start to Sainte Devote and through the tunnel into the Nouvelle Chicane on the first lap.

The figures confirm the impression from the Spanish Grand Prix that Ferrari have made quite incredible progress since their disastrous start to the season, and now promise to be a feature at every race this season.

And the big loser once the fuel is taken into account is Sebastian Vettel's Red Bull - which drops from fourth on the grid to seventh on fuel-adjusted pace, with his advantage over team-mate Mark Webber reducing from 0.382secs to 0.169secs.

Vettel was not a happy man after qualifying and now it is obvious why. The Red Bull does not suit this circuit - "there's no fast corners," as Webber put it - and by stopping so early, Vettel risks coming out of the pits into heavy traffic that could ruin his race.

It's exactly not what he needed as he seeks to stop Button extending his lead at the head of the championship.

For Button, though, it could not be better news.