Eurovision: You Decide is back!

This year, for the first time, it will be broadcast live on BBC Two at 19.30 with self-confessed Eurovision superfan, Mel Giedroyc, returning as presenter. 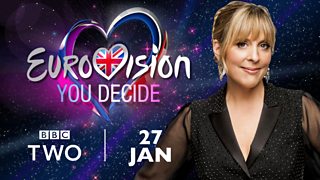 After a nationwide search, the 90-minute show will feature performances of six brand new songs. The performers will take to the stage in a bid to impress both the viewers at home and a professional panel. They will compete for the honour of representing the United Kingdom at the Final of the Eurovision Song Contest 2017 in Kyiv, Ukraine. The winner will be revealed on the night after a live public vote.

A panel of three experts will be on hand to provide insight and their thoughts about the songs and the artists, and how they could translate the performance to the Eurovision Final in Ukraine.

These six competing songs will be revealed on Monday 23rd January on The Ken Bruce Show on BBC Radio 2 and here on the official BBC Eurovision site!

Presenter, Mel Giedroyc said, “I am positively giddy for Eurovision 2017 and chuffed that Eurovision: You Decide is back! I’ve been hearing great things about the standard of the songs this year and I just wish January would hurry up so that I can hear the songs and meet the performers! We’ve got an even bigger venue, exciting guest performers and a brilliant expert panel. It’s going to be great.”

Click here for ticket information. The night will also feature performances from musical guests soon to be announced.

BBC Four will broadcast both semi-finals of the Eurovision Song Contest 2017 on Tuesday 9 and Thursday 11 May. The Grand Final itself will be broadcast on BBC One on Saturday 13 May 2017.

The BBC opened the submissions for public entries on the 6th October 2016, they are being carefully considered and shortlisted by a representative panel of official UK Eurovision fan club (OGAE UK) members. At the same time, entries are also being sought from leading professional songwriters, including BASCA members, with guidance from Record Industry Executive and Music Consultant for the BBC, Hugh Goldsmith.