Eurovision: It’s all political though isn’t it?

In my capacity as a Eurovision pundit over the years, if there’s one recurring theme that constantly crops up in interviews it’s politics.

“It’s all political though isn’t it?” “We never do well because of Iraq” “Those Eastern Europeans only vote for their neighbours”. Just some of the usual hackneyed phrases attributed to the UK’s involvement in the contest. Do these really hold true? Is it all really a big conspiracy and opportunity for Europe to take revenge against their enemies?

The accusation that the contest is ‘political’ is nothing new; for decades Greece and Cyprus have regularly exchanged the top vote whilst awarding few points, if any, to Turkey. Since the introduction of mass televoting in 1997/8 there have been claims that large numbers of expats are voting for their homeland entries. In the 2007 Semi-Final, where all ten qualifiers came from east of the Danube, some critics were up in arms claiming that the contest had been “hi-jacked by those pesky Eastern Europeans.” 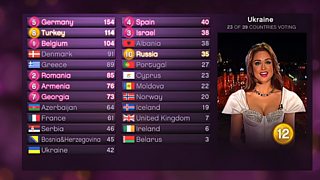 The reaction to this apparent block voting has transformed into an overwhelming negative response in the press. “UK may quit Eurovision amid fears tactical voting is turning competition into a farce” (Daily Mail). Indeed Terry Wogan quit in his role as BBC commentator after the UK finished last in 2008, whilst Russia went on to win. The failure of the Netherlands to reach the final in 2005 was held up in the Dutch media as an example of how power within the EU has shifted eastwards.

Every winner from 2001-2008 has been from a new-entrant country outside the contest’s Western European heartland, or from long-time participants yet to score a victory. In fact it was during this time that the UK saw some of its poorest showings in Eurovision finishing inside the top ten in once in the past decade. Not the best record for a country which once dominated the event. Could detractors of the contest be right? Is Eurovision inherently political which explains the UK’s poor record in recent years?

It’s not so simple. Germany won the event in 2010. A country with a pretty mediocre record in Eurovision and let’s face it, they’re certainly not the most popular country in Europe, particularly since the recession hit!

Also debates surrounding Eurovision and the increasing ‘politicisation’ of the contest, namely by Eastern European participant states ignores the voting correlations which exist between the UK and Ireland. Surely we should look a little closer to home before criticising others?

How about winning countries that have rather more contentious reputations on the world stage? I’m looking at you, Azerbaijan, Russia, Serbia, Turkey and Israel. What makes us think then that all of a sudden people get political whilst watching a song contest, when the turnout for the 2009 elections to the European Parliament was the lowest for decades? It seems that when it comes to the European project, the continent just isn’t that politicised.

Recent studies have found that voting patterns do indeed exist; former Soviet, Scandinavian and Balkan countries all tend to vote for each other. What is not proven is the assertion that voting is inherently ‘political’. The Balkan countries barely over a decade ago were engaged in full-scale war and yet here they are voting for each other in Eurovision. Is that politics? I would argue it’s something a little less sexy… it’s cultural.

Acts popular outside their own countries are more likely to get those important votes. Last year’s Serbian entrant Zeljko Joksimovic, is a megastar in the Balkans hence the high votes from the former countries of the Republic of Yugoslavia. The UK gave Ireland’s Jedward 12 points in 2011 and 10 in 2012, why? Perhaps it’s the fact that Jedward are known here and are popular. It might be argued that there is a considerable Irish vote in the UK, that is true, but is that politics? Again I’d say it’s cultural.

There’s also the elephant in the room. Have the UK acts simply not been good enough in previous competition? Have we sent credible songs from decent acts that can pull off a strong performance under pressure? When we put the effort in we are rewarded. Blue came 5th in the public vote in 2011 and Jade Ewen finished 5th overall in the final in 2009. Yes it was disappointing to finish 25th last year but in a field of 40 contestants, what makes us think that we should be in the top 10 year in, year out?

In recent years language restrictions have also been lifted which meant that the UK, Ireland and Malta lost their immediate advantage. The rise of alleged expat voting certainly doesn’t appear to have influenced the UK cause. Perhaps if all the Brits abroad around the continent picked up their phones and voted then we might see a change in fortunes?

In 2009 the EBU re-introduced the use of the jury vote, creating a 50/50 weighting with public voting. A move can be seen as evidence of the EBU’s desire to reassure to long-standing (western) participants that their concerns were being addressed.

The debate concerning the UK’s fortunes in Eurovision is an interesting one. To play devil’s advocate for a minute, would the UK have won if we had entered 'Believe' (Russian winner 2008)? Maybe, maybe not. It’s all hearsay. Does Europe really hate us? Or have we just failed to capture the popular consciousness in a way that Germany, Azerbaijan and Sweden have managed?

The 2013 contest appears to be a very open one with no apparent runaway winner. You never know, if Bonnie puts in a good performance for both the juries and the public, she might just get us on the left-hand side of that scoreboard. Having seen her on the campaign trail she looks like she’ll be a great ambassador for the UK. May be the best song win!