After much speculation the BBC are proud to announce that musical legend Engelbert Humperdinck will fly the flag for Britain, as our entry for the Eurovision Song Contest 2012!

And what a song it promises to be. Engelbert will be representing the UK with a track produced by Grammy award-winning Martin Terefe (Mary J Blige, James Morrison) and co-written by Martin and Ivor Novello winner Sacha Skarbek (Adele, Lana Del Rey, James Blunt). The track is being recorded in London, L.A and Nashville.

With a gobsmacking 45 year career as one of Britain's best-loved artists, there couldn't be a more experienced performer to hold the torch for the UK's Eurovision bid in 2012. In the past few months alone, Engelbert has performed to loyal fans in Russia, Romania, Israel, Belgium and The Netherlands. On singing for Britain, Engelbert says...

"It's an absolute honour to be representing my country for this year's Eurovision Song Contest. When the BBC approached me, it just felt right for me to be a part of an institution like Eurovision. I'm excited and raring to go and want the nation to get behind me!" 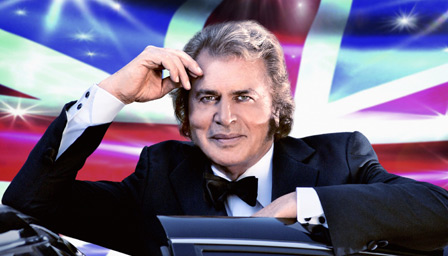 So here are ten things you need to know about Engelbert Humperdink or as we affectionately like to call him... 'The Hump'.

His real name is Gerry Dorsey

One of Engelbert's iconic 'looks' was stolen by Elvis

Jarvis Cocker is a fan

He sang 'Lesbian Seagull' for Beavis and Butthead

Jimi Hendrix was once his guitarist

He once owned Jayne Mansfield's former home, the 'Pink Palace'

He's never been to Spain (ok, we're stretching it a bit here)

Keep up to date with all of the very latest news about the 2012 Eurovision Song Contest here, with the official BBC Eurovision Blog.

You can stay up to date with Eurovision 2012 via these feeds.