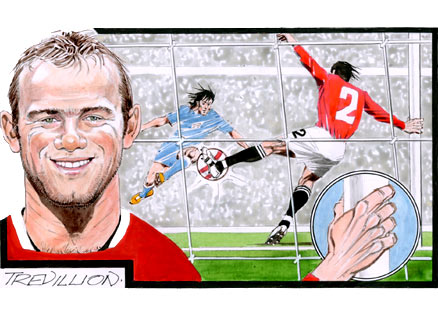 It is the dying seconds of a game and the away team are desperately hanging on to a 1-0 lead when they concede a corner.

A defender is standing on the goalline inside the post. From the corner a forward blasts the ball at goal and it hits the defender full in the chest and knocks him backwards off his feet.

The rebound goes straight back to the forward who volleys it back in, but the defender on the goalline stops his fall by grabbing on to the post. By holding on to the woodwork he is able to prevent his fall and put out his leg to make another goalline clearance, preventing a certain goal.

The forward insists the defender has gained an unfair advantage by using the post to stop him falling on his back and preventing the ball from going in the net.

The captain confronts the referee and says: "Sort it out ref. It you swing on the crossbar and head the ball out it's a card - give him a yellow!"

The manager is even more furious and argues that he has denied an obvious goalscoring chance. He calls for the referee to punish the player with a red card and give a penalty for an infringement in the box.

What would you do?

There is no offence here. The defender has done nothing wrong in using the goal post to regain his balance. No law has been broken, no offence has been committed. The decision is PLAY ON.

It would be the same decision if the player held on to a team-mate to prevent falling - it is not a free-kick.

If, however, the defender had used the crossbar to get off the ground, thus gaining extra height in clearing the ball, then this is considered to be unsporting behaviour for which he would be given a yellow card and you would restart play with an indirect free-kick.

It would be the same decision if the defender had used a team-mate to get off the ground, gaining extra height in order to clear the ball: a yellow card and an indirect free-kick.

In this particular scenario I would not dismiss for the Denial of an Obvious Goal Scoring Opportunity because the criteria of DOGSO has not been fulfilled.

Interestingly, if the defender standing on the goalline inside the posts, had used an opponent to get off the ground, he would be holding the opponent down. The decision would be a penalty kick for the holding offence, and a yellow card. He can only be given a red card in such a situation if he had deliberately handled the ball to prevent the opposing team a goal. Maybe the law needs changing in this respect.

I would completely ignore the shouts of the manager from off the field and concentrate solely on continuing to referee the game.

This was the final one in our special edition of You Are The Ref. Thank you very much for all your contributions over the past few weeks. We hope you have enjoyed playing You Are The Ref on the BBC.