You Are The Ref is back for the final time this week.

Today Paul Trevillion has crafted a lovely image of Dutch striker Ruud van Nistelrooy to go alongside another unusual You Are The Ref scenario. 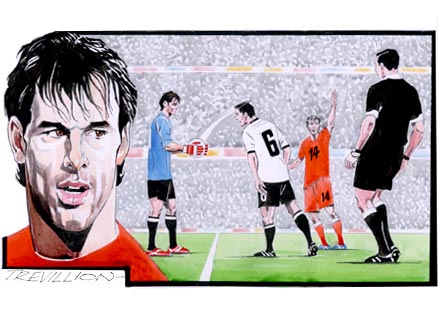 Question
A team hanging on to a one-goal lead are desperately trying to waste time when their goalkeeper catches a long range shot from Dutch striker Ruud van Nistelrooy. The keeper runs to the edge of the penalty area and then calls for a defender, who runs up close to him and throws the ball for him to head back into his hands. He does this repeatedly, assured it would not be judged a back pass.

a) If an opposition player came and tried to break it up, would he get booked for attempting to stop the keeper taking a throw out to a teammate?

b) Is there a ruling which would allow you, the referee, to put an end to this time-wasting ploy? If so, how would you re-start the game?

How would you handle this situation?

Use the comments field below to give your answer. Thank you to Aerialflipflap for posing the question. The answer will be provided tomorrow, when there will be another opportunity to pose your suggestions for next week's You Are The Ref.

Now it is time to revisit yesterday's question. 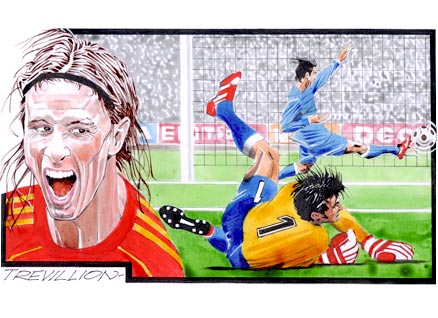 Yesterday's question
A defender is off the pitch receiving treatment and you have clearly told him to remain on the sideline until you signal for him to return. Spain are on the attack and Fernando Torres receives the ball outside the penalty area, runs through the defence, rounds the goalkeeper and taps the ball towards the empty net. As he turns to celebrate his goal the defender who was off the field receiving treatment sprints back on to the pitch without waiting for your signal to invite him on and performs a last-ditch goalline clearance.

How would you deal with this situation?

Keith Hackett's answer
Award an indirect free-kick to the opposing team from the place where the player touched the ball. Caution him for entering the field of play without permission. If he had already been cautioned, administer a second yellow card and then a red card. As the incident took place inside the goal area, (defending players have to be at least 9.15m from the ball) the defenders must stand on the goalline and between the goalposts.

This is an excellent question and sure to create a lot of debate, with many insisting he should have been shown a red card for denying a goalscoring opportunity.

Thanks again to TigerSarjo for the question.

This question is now closed.

To see the answer from You Are The Ref's Keith Hackett click here.