Spain are the complete package

Spain passed a big test by beating the Swedes and booking their passage to the quarter-finals of Euro 2008 in the process. After ripping apart Russia in their opening game, Fernando Torres and co were made to work really hard for their second win in Group D.

We always recognised that the Spaniards possessed bags of flair and talent. What we didn't know was if they had the steely resolve that is also needed if you are to win a major tournament. I think we have the answer now. 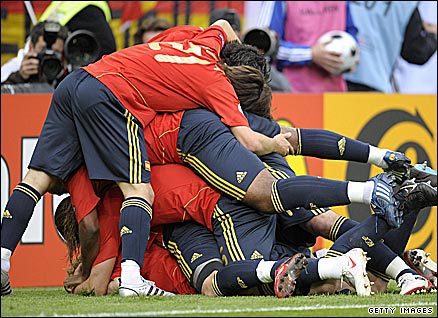 They had to be very patient at times against Sweden, whose game plan was to keep the game as tight as possible. But they kept their focus and their cool, even when a few decisions went against them. I liked that.

Spain deserved to win because they were the team chasing victory - they weren't content with just a point - and, in Torres and David Villa, they have two strikers who can win a match with one stroke of genius. I was very impressed.

How can you not fail to be bowled over by the Dutch, too? They continue to play Total Football - and in Real Madrid midfielder Wesley Sneijder have a diamond of a player.

Their ethos seems to be "you attack us and then we'll attack you". They are clearly very confident of scoring more than the opposition. That's seven now in two games. But, after conceding just one goal against Italy and France, their defence is looking solid as well. They destroyed the World Cup finalists.

A number of things impress me about the Dutch but especially the power they have on the bench. We all saw what Arjen Robben and Robin van Persie did when they were introduced against the French. Simply devastating.

As for the other two 100% teams - Croatia and Portugal - well, they've shown their credentials, too.

Croatia's win over Germany was a shock. I thought Slaven Bilic's side might be a surprise package, but I wasn't sure how they would fare after Eduardo's injury.

Against Austria in their first game, they looked very good for the first 20 minutes or so after scoring an early goal. Luka Modric was everywhere, dictating the play. But then they faded. Against Germany, they never really let their standards drop and deserved the win. Ivica Olic played up front on his own, with Nico Kranjcar just off him, and the tactic seemed to work. 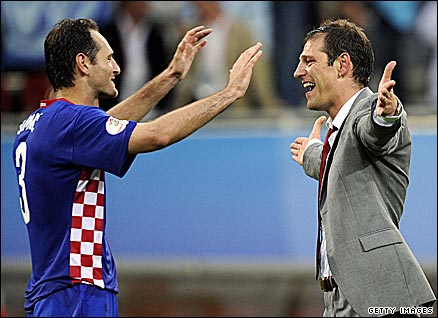 I like Bilic. He oozes self-belief, which rubs off on his players. He reminds be a bit of Kevin Keegan, able to make his players think they are better than perhaps they are.

Portugal were the first team to qualify for the last eight, but then came the news of coach Luiz Felipe Scolari's appointment as Chelsea boss. Some think that may upset Cristiano Ronaldo and co, but I don't. They are looking very good.

So, as we enter the final round of group games and with 14 teams still in the mix, it's all about second place.

There are some cracking games coming up, too, starting with Turkey v Czech Republic on Sunday night. There's been a lot of talk about the Group A match going to penalties if it ends in a draw after 90 minutes. I don't think it will come to that. The Czechs to win in normal time.

Austria are still alive, but not after Monday's Group B clash with Germany. They may have come unstuck against Croatia, but Joachim Loew's side won't make another mistake.

On Tuesday, it's the big one: Italy v France. My two tips for the quarter-finals before the tournament started could both bow out. They've been very poor so far, but for different reasons. France have lost the dynamic attacking edge they have become famous for, while Italy's defence has lost its aura of invincibility.

Victory is a must for either side, but even then it may not be enough. That's because Romania are still very much in the hunt.

It will be interesting to see what kind of team the Netherlands put out against Victor Piturca's side. I expect Marco van Basten to rest a few of his star players, but that doesn't mean victory is a given for their opponents. The players that come in will want to make the most of their opportunity while the Romanians are no mugs. Let's not forget that they finished above the Dutch in the qualifying stages for the Finals.

Still, after thinking long and hard about this one, I think Italy will join the Netherlands in the last eight. Roberto Donadoni's side will beat France and Romania won't get the win they need.

Finally, Sweden and Russia meet in Group D's crunch encounter on Wednesday. For Sweden, so much depends on Zlatan Ibrahimovic. For Russia, Guus Hiddink could recall Andrei Arshavin. Zenit St Petersburg's gifted playmaker, who missed the first two games because of suspension, could make a big difference.

Do you agree with me? Let me know what you think?

Gavin Peacock is an expert summariser for BBC Sport, working on Match of the Day, Football Focus, Score and Radio 5 Live. Please check our FAQs if you have any questions.