Arshavin on the up - Villa slides

Andrei Arshavin looks to have eclipsed David Villa as Euro 2008's hottest property - and the inspirational Russian No 10 has also leapt above the Spaniard in BBC Sport's Player Rater rankings following the quarter-finals.

Arshavin now has a 9.02 rating after inspiring Guus Hiddink's side to victory over the much-fancied Netherlands, while Villa (8.13) has dropped to third place, behind Polish goalkeeper Artur Boruc (8.37), after getting a 7.0 mark for his performance in Spain's penalty shoot-out win over Italy. 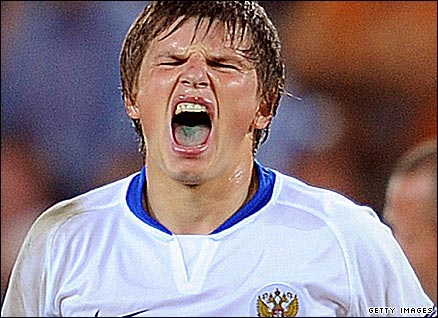 There are three keepers in the Top 10 - but Iker Casillas is not one of them. Despite his heroics against the Italians, which earned him a mark of 8.46, he has an overall rating of 7.11.

Germany's Bastian Schweinsteiger is one of Euro 2008's most improved players, earning 8.54 for his stunning performance in the surprising 3-2 win over Portugal.

But the midfielder's transformation is not quite as stark as Semi Senturk. After getting a 5.28 mark in his first game, the Turkey striker received 8.26 for his display against Croatia.

At the other end of the scale, striker Luca Toni was rated as the worst of the Italians in the defeat to Spain, earning a mark of 4.97. But that was not as bad as Portuguese pair Ferreira (4.89) and Ricardo (4.32) and Dutch duo Kuyt (4.85) and Heitinga (4.8), who all failed to impress in their respective quarter-finals.

Is that a fair reflection of their performances? If not, let us know. And tell us who's caught your eye.

(* According to users of the BBC Sport Player Rater)

Don't forget, the Player Rater will be up and running for the three remaining matches. You can mark players up to 24 hours after the matches take place.

Phil Gordos is a senior broadcast journalist at BBC Sport Interactive. Please check our FAQs if you have any questions.