I don't mean one of your stray locks that fell into the butter. What I want to know is whether amino acids produced from human hair were used to process the flour that went to make that piece of toast you wolfed down on the way to the bus stop.

It sounds unthinkable doesn't it? But when I became a temporarily became a vegan for Newsnight, I developed a keen interest in what goes into the food I eat and I discovered that a food additive which is sometimes produced from human hair can be used as an additive in some baked goods. 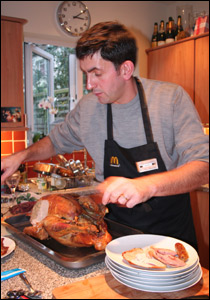 But first, the veganism. I did not do it out of high principle. The idea was to test the claim made by a number of people who e-mailed in to insist that becoming a vegan significantly reduces one's impact on the environment.

I was vegan for one month- January 2007. So this did not preclude me eating Ned the Newsnight turkey for Christmas 2006.

I am happy to report that Ned was as tasty as he was ethical. My family gnawed our way through his ample carcass over the course of a full week. We ate Ned roast on the big day, then sandwiched, curried, as a supreme and finally in a tasty soup. Then, as the last few slices of Ned grew an extravagant mould in the bottom of our fridge, the New Year turned and my diet became completely meat and dairy free.

It wasn't easy. I did not just cut meat and fish out of my diet. Vegans don't eat any animal products including milk, eggs and honey. So did cutting out all animal products reduce my carbon footprint?

I need a bit of persuading about the bees but cows certainly produce an impressive quantity of greenhouse gases - some 500 litres of methane a day per animal.

And methane isn't the only issue. It is claimed that one acre of arable crops can produce enough food for up to 20 people. Turn that field over to beef production and it will feed just one person.

Not only that, raising animals is a lot more carbon intensive than growing vegetables. David Pimentel, an ecologist from Cornell University, has calculated that animal protein production requires more than eight times as much fossil-fuel energy than plant protein yet yields proteins only 1.4 times as nutritious for humans.

That's the average. When you look at individual sectors the figures are even more startling. Take beef, for example. Using US Department of Agriculture figures he found that beef production requires an energy input to protein output of 54:1 (as well as 100,000 litres of water per kilogram of meat).

Vegetarians shouldn't feel too smug, though. Milk protein has a ratio of 17:1. In fact, rather depressingly the most efficient form of animal production - perhaps not surprisingly - is battery chickens. Pimentel finds that broiler chickens have a ratio of energy input to protein output of just 4:1.
My problem has been eradicating all these inefficient animal proteins from my diet. Take my very first day of vegan living, New Year's Day.

I hadn't prepared very well and hadn't got any margarine in. The local corner shop, a Londis, was open and they stock a good range so I wasn't too worried. But as I worked my way through the eight or so different varieties of margarine I was amazed to find that every single one contained milk or dairy products in some form.

It makes you realise just how common the use of animal products in food is. Before I became a vegan I would eat animal products in every single meal. Indeed the Vegan Society points out that some vegans consider tap water unacceptable because it contains chemicals that have been tested on animals.

I am not going that far but I have certainly developed a mania for reading food labels and there are all sorts of unexpected animal additives.

Most people know that gelatine is produced from animal skin and bones and that the rennet used in some cheeses comes from calves' stomachs. But did you know that bone char (from cow bones) is still occasionally used to whiten some sugars or that some wines and many beers (particularly real ales) include isinglass - a substance obtained from the swim bladders of fish?

Which brings me back to the possibility that human hair may be used in bread. A vegetarian friend alerted me to the existence of an animal-based flour additive called L-Cysteine. It is an amino acid which is used as a flour improver. It is known as E920 and is permitted for use in all biscuits, breads and cakes except those that claim to be wholemeal.

The problem for a would-be vegan is that traditionally L-Cysteine is produced from feathers, pig bristles and sometimes even human hair. These days L-Cysteine can also be produced synthetically but apparently human hair remains one of the richest sources of this amino acid - it makes up about 14% of your hair - and there is a small industry in China making the additive from hair clippings.

There's even a paper on the web written by a Rabbi about whether L-Cysteine from human hair is kosher. Apparently it is - so long as the hair in question was not harvested from dead bodies.

So how commonly is L-Cysteine used? My vegetarian friend claims that the problem with E920 is that - even when it is used - it doesn't have to be listed in the ingredients. She says that's because it is broken down in the baking process so the manufacturers argue that doesn't constitute an ingredient.

That is something the Food Standards Agency flatly denies. It says that L-Cysteine must always be labelled. Indeed, the industry says the reason you so rarely see E920 on labels is that these days it is very rarely used (apparently it was much more common fifteen years ago). The industry also says that the only L-Cysteine their members would use is the synthetic variety.

That is a little odd because according to the Food Standards Agency the European regulation specifies that only L-Cysteine produced from duck and chicken feathers or from pig bristles can be used. That means that, so long as your daily bread was baked in Europe, it almost certainly does not include human hair.

But it's a little confusing. If British bakers are using synthetic L-Cysteine are they breaking EU guidelines? It is hard to get a straight answer. Biscuit makers told me it would be added when the flour is milled - and the millers say it's something the bakers would add.

So if anyone can put this hairy issue to bed once and for all I'd be very grateful. And while I am on the subject, if anyone knows of any other animal-based (or human-based) food ingredients a vegan needs to steer clear of, please do tell me.

NB - Look familiar? This blog is made from 100% recycled material from Justin's 2007 Ethical Man series - keeping it ethical.