Why cars are greener than buses (maybe)

I am going to commit a green heresy.

What I am going to say will challenge everything you have heard about environmentally friendly lifestyles.

I am going to argue that cars can be greener than public transport.

But before I do, I should put my cards on the table. I'm a pretty ordinary bloke. I love driving and have been a car owner and driver ever since I passed my test. But I was forced to get rid of my car after I was press-ganged by the Newsnight editor into a year-long experiment in ethical living.

It was a sad moment as I stood with my family in 2006 and watched my precious Saab being winched away from outside my home.

You can see my humiliation for yourself here and judge for yourself whether you think my experiences have clouded my judgement on this issue.

Since that fateful day - and I've remained car-free all this time - I've been studying the carbon consequences of car ownership.

So let's look at the facts.

It is true that at first glance cars appear to compare very badly in terms of carbon dioxide emissions to other forms of transport.

The average car emits something like 180g per passenger kilometre.

You may be surprised to learn that, on that basis, taking the car is less environmentally friendly than taking a typical, well-filled short-haul plane, which emits 150g/km per passenger. 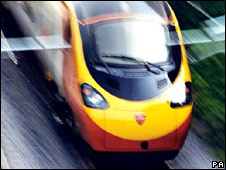 The figures show trains to be much greener, as you might expect. According to its publicity, one of Virgin's new Pendolino trains travelling half full up the West Coast main line clocks up just 27g per passenger kilometre.

But it is quite easy to tilt the statistics in favour of the automobile.

Cars appear very inefficient because, more often than not, just one person travels in a car. Pack in extra passengers and you quickly make the car a dramatically greener option.

The extra weight does increase fuel consumption - but only very marginally. Why? Because each additional passenger only weighs a tiny fraction of the weight of the car itself.

Think about it. The average car weighs in at over a tonne. Meanwhile the average passenger weighs around 70kg (the average British woman weighs 65kg and the average man something like 75kg).

That means each additional passenger adds just 7% of extra weight. Taking our average vehicle, that works out at just over 12g/km per extra passenger.

So, if I pack my family of five into a car, the average emissions per passenger falls to just 45g/km (and that's not taking into account the fact that most members of my family are very small). 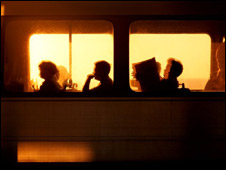 But - I can hear the greens amongst you protesting - the train still wins out. Does it? Really?

Earlier this year, the Guardian and New Scientist writer Fred Pearce dug a bit deeper into the green claims made by train companies.

He found that most Virgin trains are nowhere near as clean as the Pendolinos. Virgin's most modern diesel train, the Voyager, emits 74g per passenger kilometre when travelling half-full. That's almost three times as much as the Pendolino, and half as much again as each member of my family travelling by car.

Travel on a Voyager when it is a quarter full and your emissions per kilometre travelled are about the same as sitting in a fullish plane. "More leg room", says Fred, "but no greener."

Catch a half-full sleeper up to Scotland and your carbon footprint is much worse. He calculates that with 12 people in a carriage you'd be lucky to emit less than 200g/km. 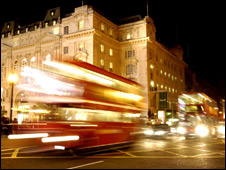 The figures are likely to be pretty similar in the UK. Some suburban bus routes in London are subsidised to the tune of £10 per passenger journey apparently (at least, that's what a mole inside the Mayor's office tells me). That suggests very low occupancy, and therefore a whopping carbon footprint.

But am I being fair comparing a car full of people with an empty bus or train?

I couldn't find good occupancy figures for UK public transport systems - please help me if you can - but it seems most of our buses and trains are far from full most of the time.

Double-decker buses make a lot of sense in the rush hour but rumble around our cities almost empty in off-peak periods. Indeed, even at peak times every packed rush-hour bus is likely to make its return journey nearly empty.

And public transport has to offer a frequent service all day long. People won't use buses and trains unless they know they can get to where they want when they want.

We could run smaller buses in off-peak periods to cut emissions but think of the cost: bus companies would have to buy twice the number of vehicles. Read more about why public transport can be high-carbon here.

Should we conclude from this that the green choice is the car? 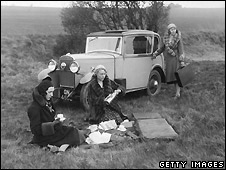 That's because buses and trains are running anyway. They will be out there generating CO2 whether you ride them or not. So when you choose to take your car, the pollution you create will be on top of whatever the public transport option is producing.

The other key point is that my argument only really holds so long as you have other people in your car with you. Travel alone - the statistics show - and the car is, just as the greens claim, one of the most polluting forms of transport on earth.

So how have I got on without my Saab?

Well, despite my misgivings about getting rid of it, the truth is I found life without it much easier than I thought.

I recognise that giving up the car will not be so easy for most people. I live right in the heart of London, where public transport is almost always quicker and easier than taking the car.

But if you insist on continuing to use your car, you can get some tips on driving the low-carbon way in this video (made several months after I gave up the Saab). You can also see how a friend and I came up with a novel way of using my car to cut both our carbon footprints.