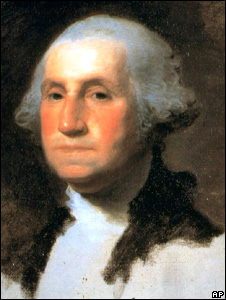 In the US state of Virginia the talk is of revolution. In the basement of a restaurant in Richmond we met 100 or so American patriots -ordinary people who claim to be the vanguard of a great new movement, a movement for American liberty.

The words of Patrick Henry, a son of Virginia and one of the founding fathers of the United States, ricocheted around the room: "Give me liberty, or give me death."

The echo of the American Revolution is deliberate. This movement takes as its manifesto the Declaration of Independence itself. Many supporters say they carry a copy of it with them at all times.

The meeting in the Richmond basement was organised by a group called FreedomWorks. Supporters describe themselves as "conservative" but they are not necessarily Republicans.

Their call to arms focuses on two issues: healthcare reform and - you guessed it - President Barack Obama's plan for a cap and trade system to regulate greenhouse gas emissions.

It presents its aggressively libertarian, small government agenda as a direct challenge to the politics of the new administration.

It claims to be engaged in nothing less than a battle for American freedom.

The scale of this new revolutionary army became apparent in September with a giant rally in Washington to commemorate the day after the 9/11 attacks on the Twin Towers.

A day when, the movement says: "we were united as Americans, standing together to protect the greatest nation ever created".

How many actually attended is contested. According to the official count tens of thousands marched; the organisers say hundreds of thousands, even millions turned out. But there is no question this movement has wide appeal.

It has been picked up and fostered by the right-wing media, in particular Fox News and its anchormen Glenn Beck and Sean Hannity.

But this cannot be dismissed as a trivial media confection.

The notion of freedom this movement promotes has potent appeal here in the US.

It is rooted in the founding principles of the US themselves - the "inalienable" rights to life, liberty and the pursuit of happiness that the Declaration of Independence holds to be "self-evident".

This is the idea that individuals have inherent rights, including property rights, which may not be arbitrarily overridden.

(An idea that is, incidentally, arguably Britain's greatest legacy to the US).

The movement argues that the Declaration is a charter for small government and quotes George Washington in support: "Government is like fire, a handy servant, but a dangerous master."

They claim that the Obama administration's cap and trade plans, together with its stimulus package and its plans for healthcare reform, represent an unwarranted incursion into the rights of Americans.

These conservatives are changing the context in which the Obama administration has to make its case for government action on climate.

The argument that the effects of climate change will make pursuing life, liberty and happiness very difficult just does not wash with them.

Most of the people I spoke at the Richmond meeting did not believe climate change is something they need worry about.

Debate on how to tackle a problem becomes very difficult when people do not believe it is a problem that needs to be solved.

As the meeting broke up one man took me aside to say he was not persuaded by the arguments he had heard.

"You are in a state that fought for the freedom to keep people in slavery," Phil told me.

Indeed, Patrick Henry, who demanded liberty or death as he helped launch the revolt against British tyranny, subsequently worked to defend the slave trade as an attorney.

Phil told me the story of Gabriel, a slave who, 24 years after the Declaration of Independence, attempted to lead a rebellion against the slave owners here in Richmond Virginia.

Gabriel turned Patrick Henry's words around - "Death or liberty" was his slogan.

Liberty eluded Gabriel. He was betrayed and his rebellion was crushed by the Virginia state militia before it had even begun.

Gabriel was hanged just a couple of blocks away from the cellar where the FreedomWorks meeting was held.