My guide to making your fortune 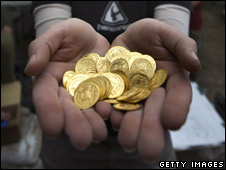 Making a fortune is simple. All you need to do is find something worthless and give it value.

Read on, because I will tell you how to just that. I will show you how to take a substance we all throw away and convert it into something useful.

The discovery came at a high price. It involved making one of the most humiliating television reports ever broadcast by the BBC.

BE WARNED: this report features nudity, public urination, a surprising swimming pool sequence, a discussion of one of our most taboo topics and a shocking shower cap.

It also features footage of a minor celebrity in his Speedos - can anyone spot him?

So what has saving water got to do with making a fortune?

The answer lies in that back garden in York, featured in the video. What I saw there led me in search of the man who inspired the system.

And - three years later - I managed to track him down in his cabin in the backwoods of Pennsylvania.

The man I met in his home in the woods earlier this year has developed a revolutionary new system for dealing with one of the most fundamental processes on earth. By doing so he has become an inspirational leader, not just for John in York, but for tens of thousands of people around the world.

He has - how shall I put this? - started his own movement.

He's called Joe Jenkins and is the author of The Humanure Handbook, the world's first guide to composting your own poo.

Obviously, I am alive to the comic aspects of these two men's obsession but the problems caused by human sewage are no joke. Sewage pollutes water and spreads disease. Millions of people around the world die every year from illnesses spread by sewage.

It is expensive too. Joe claims that we each produce over a kilo of the stuff every day - a total of half a tonne a year. That's 30 million tonnes of human sewage every single year in Britain. Disposing of all that waste costs hundreds of millions of pounds a year.

Which is where Joe's system comes in. Instead of regarding human excrement as a waste product Joe sees it as something that can be useful.

Our sewage is full of nutrients: "faeces and urine," writes Joe in his book, "are examples of natural, beneficial, organic materials... they are only waste when we discard them."

What Joe's composting system does is capture those valuable nutrients and return them to the soil.

Joe collects his and his family's waste and converts it into a rich compost which he uses to fertilise his garden. Thereby, says Joe, "closing the human nutrient cycle".

I ate a venison chilli Joe prepared with "humanure" fertilised tomatoes from his garden. Delicious!

Of course the idea of composting human excrement is not new, people have been doing it for millennia. What Joe has done is brought a scientific approach to the process. He has shown that, when composted properly, all the pathogens in poo are destroyed.

He has also demonstrated that "humanure" composting can be done almost anywhere. There are composting toilets based on Joe's system everywhere from Manhattan apartments to yurts on the Mongolian steppes. 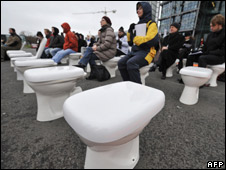 And Joe's experiments with "humanure" can cut carbon emissions. It takes huge amounts of energy to fix the nitrogen used in most commercial fertilisers and they cause the release of huge amounts of nitrous oxide from the soil. And nitrous oxide has 296 times the global warming power of carbon dioxide.

Greenpeace estimates the effects of nitrous oxide and the emissions from the energy required to make fertiliser together account for almost half of all the direct emission from agriculture - that works out at almost 5% of total world greenhouse gas emissions!

Joe is convinced that large-scale "humanure" production could become a source of low-carbon fertility for the soil.

It could also reduce the 3.4% of the world emissions generated by waste processing.

This year, Joe has been exploring how his composting processes can be scaled up. He's had an intern from a local university working full time on the project. The ultimate aim is to make composting human waste into an industrial process.

His book and sales of his toilet system have earned Joe a very comfortable income.

The fortune will come if he can achieve his dream - spreading "humanure" across the world.

So who wants to take this technology on? Are you ready to install a composting toilet in your house?

(You will be pleased to know that, in keeping with the ethos of the Ethical Man project, this article is recycled from a previous post. Also, Francis Maude is now Shadow Minister of the Cabinet Office rather than Chairman of the Conservative Party, as he was in 2006 when the first video was filmed - but there is no reason to suppose that this has changed his approach to composting.)