Can rural America hold the world to ransom? 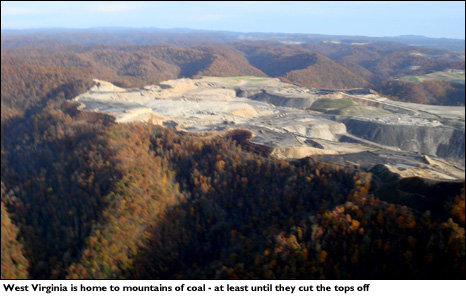 West Virginia is the mountain state. Its mountains have defined the state's history, and now the mountains of Virginia look set to determine whether the world begins to tackle global warming.

That may sound a little apocalyptic, but please bear with me.

The American nation was born in Virginia where the tobacco plantations - established in the early 17th Century - gave the country its first economic boom.

Neighbouring West Virginia, by contrast, remained a rural backwater thanks to its vertiginous topography.

A life shaped by terrain

The mountains of West Virginia are not high, but boy are there a lot of them. As a result, the state had little to attract settlers.

The sea of mountains makes travel difficult and farming near impossible. West Virginia's only significant industries until the middle of the 19th Century were salt mining and charcoal burning.

And, 150 years on, West Virginia is still predominantly a rural state. Its population is less than two million, its state capital, Charleston, has just over 50,000 residents. 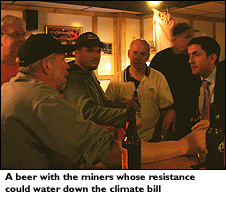 So how come this remote, rural state is playing a pivotal role in determining the international deal on greenhouse gas emissions that is likely to be done at the Copenhagen conference?

The reason comes back, again, to those mountains.

West Virginia remains economically isolated. There is still virtually no industry here. It is the third poorest state in the union in terms of per capita income.

But there is one thing West Virginia has mountains of - and I mean literally mountains -and that is coal.

You get a sense of the true scale of that figure when you meet some of the guys who dig the stuff up.

The miners I met up in the hills outside Fairmont all work a single seam of coal, the famous Pittsburgh seam, one of the greatest mineral resources in the US.

The seam is up to eight feet (2.4m) thick and runs for hundreds of miles from Maryland to Ohio and from Pennsylvania deep into West Virginia.

It is so vast it has been being worked constantly for almost 200 years.

Indeed, the Pittsburgh seam can reasonably claim to have laid the foundation for the industrialisation of the US.

It is perfect for coking and therefore perfect for making steel, as industrialist Andrew Carnegie discovered. His great fortune was made using Pittsburgh seam coal to make the steel that built modern America.

One of the miners I met, DJ Weaver, is the fourth generation of his family to mine the Pittsburgh seam.

He, his father, his grandfather and his great-grandfather all spent their lives working Pittsburgh, and there is reckoned to be enough coal left for another couple of generations of the Weaver family to be employed on the seam.

And the Pittsburgh seam is just one of West Virginia's coal reserves.

Not surprisingly, coal dominates the economy of this state and has also shaped its politics.

The governorship, two of the state's three House of Representatives seats and, crucially, both Senate seats are held by Democrats.

It is those two Senate seats that have put West Virginia in such a pivotal position in terms of climate legislation.

The Obama administration needs 60 Senate votes for its climate bill if it is to avoid a Republican filibuster - a roadblock to the bill.

The electoral calculation only adds up so long as every Democratic senator votes with the administration.

But both Democratic senators here in West Virginia have said they will vote against the bill.

That means Senator John Kerry, the former presidential candidate who is sponsoring the bill, is looking for compromises that might draw them back into the fold.

He is also being forced to consider inducements - like offshore drilling permits and incentives for the nuclear industry - which might attract wavering Republicans.

In short, West Virginia's opposition to the Senate climate bill will end up watering down America's position on climate.

That, in turn, will dilute any deal done at Copenhagen .

It may seem extraordinary that a sparsely populated, rural state like West Virginia could hold such sway in international politics, but the logic here on the ground is compelling.

"What would you do if the mines closed?" I asked the miners.

They shook their heads: There aren't any good jobs outside of coal here", they told me, "West Virginia is coal".