Are sportspeople right to retaliate?

If sport has ever had a moral high ground, it has felt in the last couple of months as if some of its top stars have been hurtling towards its foothills quicker than an Olympic downhill skier.

An F1 driver is ordered to crash his car, a rugby union player is cut deliberately to cover up cheating, a top striker admits he "exaggerates" his reaction to fouls. Has trust in what we see on the field of play hit an all-time low?

It feels like a good time for 5 live Sport to borrow an idea from our friends on Radio Four, and launch the first sporting Moral Maze.

The idea is that we'll have an in-depth debate on some of the moral and ethical issues behind one of the stories which has dominated the headlines in recent weeks. And to kick off, we're asking: Do sportspeople have the right to retaliate after abuse from fans?

Emmanuel Adebayor was criticised in all quarters for running the length of the Eastlands pitch to celebrate scoring for Manchester City in front of the Arsenal fans - fans who'd roundly abused him throughout the match. In the end, the FA restricted his punishment to a fine and a suspended ban. 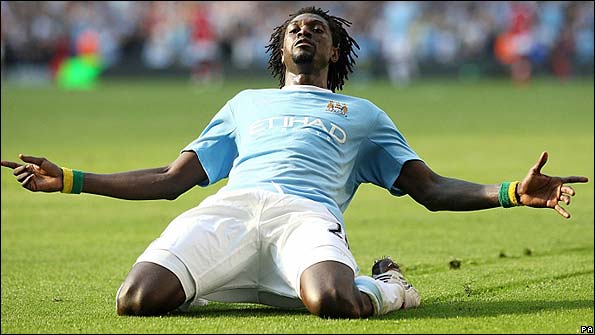 And when Craig Bellamy appeared to shove a United fan who ran onto the pitch at the end of the Manchester derby, Greater Manchester Police launched an investigation. The fan was banned, Bellamy wasn't charged.

So how much responsibility do sports people have to control their behaviour on the pitch - even when they're subjected to extreme provocation? You didn't see Ricky Ponting throwing a tantrum when he was booed during the Ashes series during the summer.

And how far does the concept of free speech extend to crowds at sporting events?

Were the Spurs fans who sang an offensive song to Sol Campbell just exercising their democratic right to have their say?

Would some of the abuse players have to put up with be punishable under law in the world outside? Or do sporting arenas have their own rules - in every sense?

In short, where do you draw the line when you cross the white line?

We've put together a panel of deep sporting thinkers to debate these issues. Journalists Matthew Syed and Will Buckley and director of Sporting Integrity Michele Verroken will hear evidence from expert speakers and then share their own conclusions.

We'll hear from a footballer who's experienced at first hand the abuse some players receive while going about their daily business.

Can you imagine how you'd feel if you had to put up with it at your place of work. Or is your sympathy limited by the fact that some of them are on more than 100 grand a week, and effectively you're paying their wages?

We'll be joined by a football fan who'll argue that football is becoming too sanitized, and that sport needs its tribal rivalries to keep it alive.

But is that just an excuse for foul mouthed bigotry from the stands? Don't the fans themselves have a moral obligation to respect those around them - not to mention the young supporters to whom we should all set an example?

And we'll get an insight into the legal implications for the spectators identified as the key culprits in the offensive chanting, and for the players who retaliate. Should they be dealt with under the laws of the game, or the laws of the land?

Of course, we want to hear what you think too - let me know on this blog where you stand on the issues, and text us during the programme. I'm looking forward to hearing how you're picking your way through the moral maze.