There are times in this job when you get to interview someone whose story is so inspiring, whose determination to succeed despite the odds is so great, that all your trivial worries and concerns seem paltry in comparison.

Earlier I spent half an hour on the phone to just such a person. It was eight o'clock in the morning, when I'm usually dashing around pestering the kids to get themselves ready for school.

But it was the only time my guest could talk, and with the prospect of me being in the studio presenting 5 live Sport until later on Thursday evening, we linked up the phone lines between London and Italy, with a producer at Television Centre recording it all for Thursday's show.

At the end of our conversation, the question of whether my younger daughter had remembered to pick up her guitar, or whether the elder daughter had practised her seven times table, didn't seem to matter a huge amount. 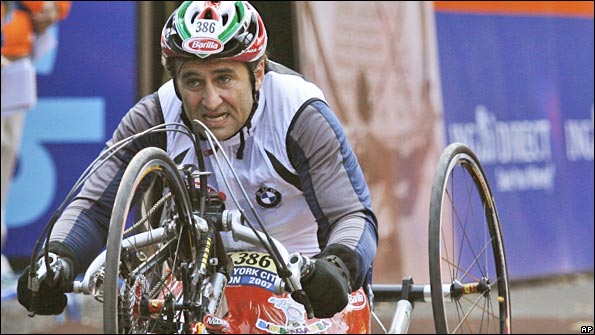 All things being equal, Alex Zanardi shouldn't be alive today, let alone pursuing a successful career as a motor-racing driver and dreaming of competing at the 2012 Paralympics in London.

When, in September 2001, he crashed in a CART race at the Lausitzring in Germany, both his legs were severed above the knee. He lost a massive amount of blood, and was only saved by the rapid arrival of medical teams at the scene. Accounts of the accident make horrific reading.

He even used his racing driver's knowledge of highly-specialised materials to help develop his own prosthetic legs - and designed them so he could take his three-year-old son swimming, and throw him around in the pool like any Daddy would.

By 2004, Zanardi was back behind the wheel full time, driving touring cars with specially adapted hand controls. He even had the chance to do some Formula 1 testing, for the BMW Sauber team, and he admits he dealt with the problems of squeezing into the tight F1 cockpit in a novel way.

"The technicians were trying to take out protective plates in the footwell, to expand the size - so I said, hold on a second guys, I'll just change my feet! So I went down from a size 43 (UK size 9) to a size 36 (UK size 3) - and that helped me dramatically!"

I was bowled over by Zanardi's humour and total lack of self pity - a relative rarity when some sportspeople are only too quick to complain or make excuses. And at a time when the reputation of Formula 1 is at an all-time low, I was interested in how a man whose life was turned upside down by a crash on a race track felt about Nelson Piquet and Crashgate.

"I am very sad for the sport," he said. "No-one goes away from the story with a clean soul. I believe we will never really know the truth. I am 42 now and I think differently from how I thought in my 20s, but I am sure that if someone had asked me to do this, I would have said, no thank you. I wouldn't have done it."

Now he's focused on a new challenge - competing for Italy at London 2012. He's already competed in the Para-Cycling Road World Championships in Italy in the hand-bike categories - where riders sit in a laid-back position and pedal with their hands, just using their upper bodies to do the work.

He finished 15th out of a field of 32, and he's hooked on the sport. "Our racing produces speeds of around 40km per hour over a 50 or 60km course. It's the opposite to motor-racing where on a Sunday afternoon what happens is much more related to luck or how competitive the car is," he said. 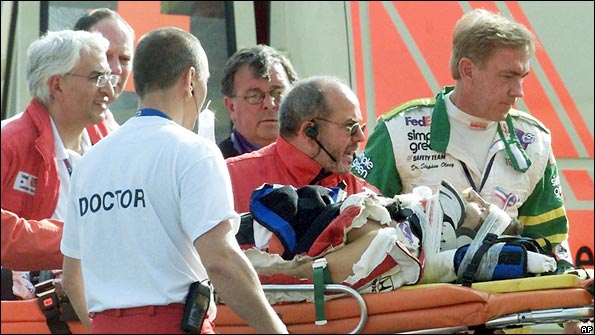 Zanardi suffered serious injuries in the crash in Germany in 2001

"With hand-bikes, it's more a case of putting one brick on top of another and eventually the wall will come up. If you train hard and work hard eventually you will gain results, and that is the real spirit of life."

But even with the profile he already has, as a hugely popular racing driver, Zanardi knows he can't take a place in the Paralympics for granted.

"It would be like testing an F1 car for one day and then going on to say - I'm going to race in the British Grand Prix at Silverstone this weekend. There are plenty of steps from where I am now to London 2012. Whether I get there is purely a dream right now," he admits.

As a friend who's been lucky enough to work at two Paralympic Games told me this morning, the secret to Paralympic success is not to worry about what you can't do - but to focus on what you can.

And that's very much Alex Zanardi's philosophy, too.

"It has been a splendid adventure because I guess human beings without some kind of challenge - they don't live well. Whenever I have a drive or have a dream, I try to achieve it with what I have."

We'll have to wait to find out if Zanardi successfully swaps the role of motor-racing driver to that of Paralympic athlete, but what is certain is this - he has the Paralympic spirit in spades.