All-Irish cast set to join Kat and Alfie for Redwater 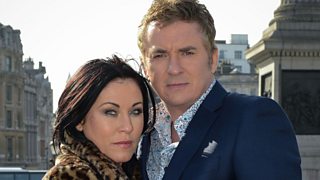 Redwater is a tiny, picturesque Irish harbour village, a quiet rural idyll by the sea where the Kelly and Dolan families have lived for generations. When Kat and Alfie Moon arrive in the search for Kat’s long-lost son, Kat’s quest for the truth uncovers secrets the village of Redwater would rather were left buried at sea.

“It was our intention from the start to create a new contemporary ensemble drama set in Ireland and we are so thrilled and lucky to have such a talented team on board for Redwater," revealed Executive Producer Dominic Treadwell-Collins. "It is testament to the quality of Jesper, Matthew and the other writers, as well as the producer Vicky’s tenacity that we have assembled such a high calibre of cast and crew to join Shane and Jessie in such a beautiful setting. We all know that we are creating something that is going to be very special.”

"We have a really important and fantastic story to tell," added Director Jesper Nielsen. "About how one woman's search for a lost child opens Pandora’s box; revealing the terrible lies and secrets in the little village of Redwater. A story about how the strong bonds of love in a family can hold everything together, and yet at the same time - destroy everything. It has echoes of a Shakespearean drama, told in a rich cinematic style, loaded with humour and suspense. I cannot wait to start the shooting and see the characters coming to life.”

Matthew Graham, writer of episode one said: “When I was an EastEnders writer, Kat and Alfie were two of the most dynamic characters to write for. To revisit them and to transport them into a community riddled with secrets and lies was too good an opportunity to pass up. Kathleen Moon is an unwitting bomb in Redwater and creating the debris from her explosive arrival is what drew me to this project.”

Fionnula Flanagan said "This is a fascinating character, full of secrets, deceit and manipulation. My favourite! It's a wonderful story which will keep you guessing forever and ever. Great writing and a fabulous director!”

Jessie Wallace said: “I walked into the drama readthrough to a table full of wonderful Irish actors and it was thrilling. They all made me feel so very welcome as we started to read the first script. It’s going to be a roller coaster!”

Shane Richie said: “Wow! What an honour to be in this unbelievable drama and working alongside some of Ireland’s finest actors. At the moment it’s a whirlwind so I’m just getting into the new scripts, which are electric!!”

Filming begins this week in Ireland and Redwater will be broadcast on BBC One in 2017.