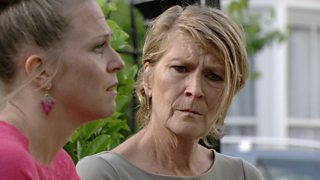 This week EastEnders saw the verdict in the court case after Dean attempted to rape Roxy. EastEnders has been breaking new ground in the last 12 months with the depiction of Dean raping Linda. While for some this was uncomfortable viewing, its approach has been supported by Rape Crisis. Too often the reality of rape is seen as too difficult to represent and so stereotypes are relied on and reinforced; however, we have continued to work alongside scriptwriters on this storyline and applaud the way they have challenged so many myths in the process.

EastEnders has now made another bold decision; rather than airing the usual version of a courtroom drama, they instead show the stress and the anxiety survivors and their loved ones experience in the criminal justice system waiting for the outcome, and learning the verdict.

At Rape Crisis we know that many women who are raped, or are abused as children, choose not to speak about their experiences. The fear of not being believed, the fear of being judged, and of being seen differently are among the many ways women who have survived rape are silenced.

We know that just 1 in 15 women who are raped make the decision to report to the police. Of those who choose to report, many cases are closed by police and Crown Prosecution Service because of insufficient evidence - a trial in a rape case is not the norm. When there is a trial we know that convictions for rape are among the lowest of any offence.

All too often we are presented with the idea that women lie about rape, and this feeds into a reluctance to recognise the fact that the only person who is to blame for rape is the rapist. What EastEnders does is help us to confront the myths that are so routinely ingrained in society and the ideas many hold as individuals.

Women are often questioned and blamed: for how they acted, how much they drank, what they wore. We see this in the way that Linda, then Shirley then Roxy take on the blame for what happened. One by one they open up about the sense of responsibility they are carrying. But they help each other recognise the truth, they confront one another’s sense of blame and break it down and reject it, realising that the only person to blame is the perpetrator. Dean, Ronnie’s dad, the men who raped Kathy: the men who choose to rape and to abuse. Ronnie says it clearest when describing the abuse at the hands of her father, Archie: “He knew it was wrong. He knew it was rape. It was his fault and nobody else’s.”

We may be angry and frustrated by the fact that Dean does not get the comeuppance he deserves and be shocked that he has got away with his crimes again. We know that he is a rapist and that he is a serial offender, and we can predict that he will continue to perpetrate his crimes against women, wherever he ends up. But it is an important reality to face, that far too often rapists are not convicted; and justice is not realised. This is why additional support, and other ways to have their voices heard, are so crucial for survivors.

EastEnders shows the strength that women can find in togetherness, in solidarity. But we as a society need to do more. We need to stand alongside survivors. We need to believe. We need recognise the incredible strength and resilience and courage that it takes to break the silence and speak out about sexual violence.

We see how overwhelming and confusing the process can be, and so Rape Crisis created series of short films as part of our #BreakTheSilence campaign which can help women to understand more about how the system works, and the fact that there are specialist Independent Sexual Violence Advocates (ISVAs) that offer support through it.