Date Confirmed for the Doctor’s Return 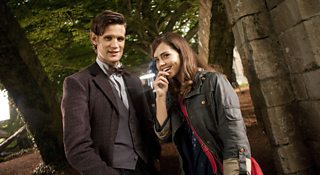 We can confirm that Doctor Who returns to BBC One during the Easter weekend on Saturday, 30 March, 2013.

The Doctor is back in a fantastic adventure written by the show’s lead writer and executive producer, Steven Moffat. The episode - the first in a run of 8 - is directed by Colm McCarthy whose previous credits include Hustle, Spooks and Endeavour.

Later adventures in the run include episodes written by Mark Gatiss (Victory of the Daleks, Night Terrors) and Neil Gaiman.

Steven Moffat has promised us that in terms of Doctor Who, 2013 will be a ‘tremendous’ year and we’ll be bringing you more about the forthcoming adventures soon. But if you can’t wait for the TARDIS to return on 30 March, you can take a brief look now at what’s in store for the Doctor, Clara and some familiar friends… and foes!

Production Designer Michael Pickwoad on the new TARDIS... and more! (Part One)