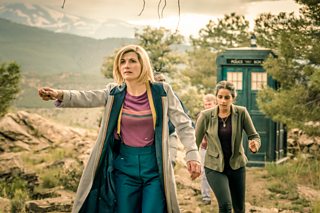 The Doctor had brought them to Calapia for its rural charm, beautiful weather and magnificent ruins. The Calapians, she’d told Yaz, were ‘a wonderful bunch, throw a party at the drop of a hat, six heads, lots of hats’. She’d also said they didn’t like to talk about the ruins, and a bit later she’d added that she’d never figured out why, two facts which Yaz had placed in the drawer in her head marked, ‘Well, I hope that doesn’t bite us in the bottom’.

Calapia had turned out to be as advertised: rural; charming; beautiful and magnificent. But the Calapians had been nowhere to be found. As Yaz and her friends had explored the buildings in one of the planet’s major cities – buildings which looked like they’d had people in them yesterday, people who’d left and carefully locked their doors behind them – Yaz had thought to herself that that mental drawer of hers got opened a lot. That there wasn’t actually a lot left in there, because most of the things that she’d suspected would bite her and her friends in the bottom actually had.

She’d been thinking that when Graham had found the sign. It had said, the letters wobbling a little in the way that indicated the TARDIS was translating for them, ‘This way to the shelters’.

‘Am I over-reacting,’ Graham had said, ‘or is that just a tiny bit worrying?’

Which was how they’d ended up in a bare room, one hundred feet underground, sitting in a circle, with the names of famous people stuck to their foreheads.

The Calapian who’d opened the door of the shelter when they’d knocked on it had been shocked to find there were still tourists who didn’t know about the Death Moon that passed over the planet every 64 years. They had quickly ushered the Doctor and friends inside and had assigned them a room. They’d asked if they had any hats and had seemed pleasantly surprised when they hadn’t. Hat storage alone, they’d said, was taking up a whole corridor down here.

The Calapian had looked awkward on all six of its faces. Then it had told them they would be down here for three of their Earth weeks. There were only minutes before the passage would begin. They had had no hope of getting back to the TARDIS.

‘Brilliant,’ the Doctor had said, a word which had been completely at odds with the sort of words Yaz had been about to utter. It hadn’t matched the looks on the faces of Graham and Ryan either. ‘Three weeks of indoor games! Result!’

It had become clear almost immediately that the Doctor, though she liked the idea of indoor games, didn’t actually know the rules of many. She’d had in her pocket a chess set, and she could play that, except she insisted on making individual noises for each piece when she moved. She’d also had a travel set of a game she insisted was really called ‘Scaribble’, despite what it said on the box, because that was how they pronounced it on a planet the name of which she couldn’t herself pronounce. They’d tried to play that first, but the Doctor kept putting down letter tiles which formed the names of places and beings she’d known, or just to make a pattern on the board. Then she’d rearrange other people’s tiles to suit that pattern and after half a day of that Graham had declared he was going on strike. He went to find the facilities, and came back reporting that, to everyone’s relief, things in that department were much like they were at home.

So the Doctor had asked them what they’d like to play. Ryan had played the game with the names stuck on foreheads at parties when he was younger, and if there was one thing the Doctor had in her pockets it was pens, as well as a handy gadget that could manufacture something like paper. ‘Except it decays into compost after a day. Or if it doesn’t it becomes, you know, highly explosive.’

Which was how they’d come to be all sitting in that circle.

From where she was, Yaz could see that the Doctor had a note reading ‘Lewis Capaldi’ stuck to her forehead, Graham had ‘Mel and Sue’ and Ryan had ‘Theodoric the Great’. She, of course, had no idea what was stuck to her own forehead. Though whatever it was clearly delighted Ryan and Graham, who’d come up with it between them.

The Doctor looked alarmed. ‘D’you think you might not be?’

‘Is this person alive?’ Ryan pointed to his piece of paper.

‘Of him on the piece of paper. You sound nothing like him.’

Ryan pointed again at the piece of paper and paced his next sentence like there was a social media handclap between every word. ‘I don’t know who I am.’

‘Bit soon for that,’ said the Doctor, ‘we’ve only been here one day.’

It ended up being one of the longest party games Yaz had ever taken part in. Or maybe it just felt that way. Following Ryan’s painful discovery of the history of the late Roman empire and a bit of confusion about what the word ‘goth’ meant in that context, Graham’s correct guess about how he could be two people at once, and the Doctor’s anecdotes about playing the triangle for the ‘lovely Scottish lad and his dad’, Yaz decided to make a serious attempt to deduce whose name she was wearing. ‘Am I a woman?’ she said.

Yaz glanced over to see the Doctor open and close her mouth, as if deciding not to say something. Yaz wasn’t sure she’d ever seen the Doctor make that decision before.

‘Yeah, pretty much,’ said Ryan and Graham, but again, the Doctor looked as if she had a problem with that but didn’t quite want to voice it.

That, thought Yaz, was unique. Unique was where answers lived. One of her criminology lecturers had said that. Who wasn’t the Doctor sure about? To the point where she wasn’t even willing to commit to them being a particular gender? Oh. She pointed at the Doctor. ‘I’m you,’ she said.

Ryan and Graham shouted in defeat, and the Doctor smiled an enormous smile, like sunshine through clouds.

Shortly after, the Doctor fixed all their phones so they could follow stuff from home and added lots of games to them too, though a lot of them didn’t make much sense. The prospect of being shut up in here with her slowly changed from, as Ryan had put it in a whisper, ‘like being stuck in a lift with a bee’ to something a lot more relaxing. Yaz watched, fascinated, as she changed how she acted, almost every hour, just happening to start telling a relaxing, funny story as the night arrived, or turning out her pockets to find miniaturised books. Every now and then she would take herself off for a brisk walk around the room with one or the other of them when they needed to vent or just needed the exercise.

At one point, a small automated device arrived, carrying a basic meal of local fruit and what turned out to be a sort of bread. The Doctor used the sonic screwdriver to confirm they could eat it. Yaz noticed her sizing them all up as they did so, while they talked about what they’d do when they got home, a frown on her face, as if just for a second they’d disappointed her.

A little later that same day, Yaz joined the Doctor on one of her walks. She wanted to share what she’d observed. ‘I thought you said you were socially awkward?’ she said. ‘’Cause I’m not seeing that right now.’

The Doctor looked worried. ‘I am. Often. Seriously. But this is a task. I’m good at tasks. Thanks for noticing. Don’t tell the others. I don’t want them to start seeing me doing it. Or they’ll get tired too.’

‘You made yourself annoying so we’d feel relieved when you stopped.’

‘Oh. Yeah. Did that without thinking about it. Relief that summat’s better than you thought it would be will get you through a day or so of awfulness. I learned that at Woodstock.’

‘What, go to 1970s hippy rock festivals? No. Never again. The mud. The poetry. The nudity. Or was that the Somme?’

‘I mean make yourself look smaller than you are.’

The Doctor’s face gurned as it only did when her brain was wrestling with something she didn’t particularly enjoy considering. ‘’S’pose. I used to like it when people underestimated me, but in this body it’s a bit rubbish, because when I go “Aha!” and I want people to stop underestimating me, they just keep right on underestimating me.’

Yaz felt that. ‘We don’t do that, though. None of us. I sometimes think if we could see all you were, at once, it’d be too much. We couldn’t deal.’

The Doctor looked bashful and pleased all at the same time, which was another of Yaz’s favourite looks of hers. ‘Well, I certainly can’t. I’m a bit too much for me. I’m more than I knew about. Still processing all that. I sometimes think that’s why I change personality instead of just making my body younger. I need to switch myself off and on again so I can handle all the memories, so a lot of it feels like it happened to someone else. I get a different perspective on what I’ve done. I’ve been thinking a lot about that lately. There’s this girl in a mirror. Where I put her. That doesn’t suit who I am now. When we get out of here… Oh, this is getting deep and meaningful, isn’t it?’ Yaz was about to say that was fine, but the Doctor swung to include the others, suddenly pulling another surprise from her pockets. ‘Balloon animals!’

Graham raised his hand, which was half a request and half an order for the Doctor to halt. ‘I’ve been thinking,’ he said, ‘about where that meal came from. I think we should go find some Calapians and say thanks.’

And there on the Doctor’s face, Yaz saw that enormous smile again.

And so the days passed in balloon animals and yoga and karaoke and also in learning all sorts of things about what Calapians liked to do, as the Doctor and her friends cooked and distributed alongside them.

On the last night of the passing of the Death Moon everyone in the shelter came together and ate and were quiet, and all those heads lowered in remembrance of what had gone and those who’d been lost. The heads of the Doctor and her friends were lowered with them.

Yaz felt, by the end of it, that she’d had a rest, honestly, physically and spiritually. Something had been proven to her in isolation. The Doctor saw that look on her face as they waited for the big doors to open. ‘In the midst of death,’ she said, so gently that only Yaz could hear it, ‘we are in life. Together.’

The doors opened and they stepped out into the daylight. Graham and Ryan grabbed each other and laughed.

Yaz took a deep breath. And the air was good.