Ben Miller to Guest Star in Doctor Who 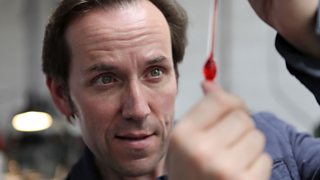 Ben Miller is set to guest star opposite Peter Capaldi when the new series of Doctor Who returns this autumn.

Commenting on his role, Ben Miller said: ‘As a committed Whovian I cannot believe my luck in joining the Twelfth Doctor for one of his inaugural adventures. My only worry is that they'll make me leave the set when I'm not filming.’

Miller achieved fame as half of comedy duo Armstrong and Miller before success in dramas, including Primeval and more recently, as DI Richard Poole, the central character in the first two series of the BBC’s Death in Paradise.

Steven Moffat, lead writer and executive producer, added: ‘Mark Gatiss has written us a storming villain for his new episode, and with Capaldi in the TARDIS, we knew we needed somebody special to send everybody behind the sofa. And quite frankly, it's about time Ben Miller was in Doctor Who!’

Other familiar faces confirmed to join Peter Capaldi and Jenna Coleman in the new series, which will TX on BBC One later this year, include Tom Riley and Keeley Hawes.