Matt and Jenna on the Truth about Clara, the Finale and More! 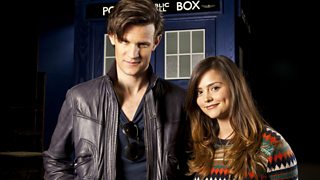 The current series has already given us some terrifying new monsters, familiar foes and even a journey to the centre of the TARDIS. But now Matt Smith and Jenna-Louise Coleman reflect on what adventures are in store and what they were like to create…

Next week’s episode is The Crimson Horror, written by Mark Gatiss. It sees the return of Madame Vastra, Jenny and Strax and features Dame Diana Rigg and her daughter, Rachael Stirling.  It’s the first time the pair has worked together on screen and they play two Victorian ladies who share a dark secret…

‘I loved working with Diana Rigg,’ Jenna reveals. ‘ I loved the way she operated and carried herself… It was great to sit back and watch how mother and daughter worked and their dynamic together.’ Matt agrees, adding, ‘It was an intriguing and creative experience watching mother and daughter work together… Dame Diana has had such an illustrious career and Rachael is a great actress.’

The following week the Doctor becomes embroiled in a Nightmare in Silver. The episode is written by Neil Gaiman and features new look Cybermen. Matt’s not giving much away but he does tell us, ‘I think they’ll surprise a few people…’ Neil Gaiman has confirmed his brief was to make the Cybermen scary again so we look forward to their return with a degree of excited trepidation!

The finale has the intriguing title, The Name of the Doctor, and Jenna lights up as she discusses it. ‘The finale story is such a fantastic idea; it’s epic and huge and filled with drama. It was really exciting to sit down and read the script,’ she enthuses.  ‘There are little bits and pieces which Steven planted a couple of years ago.  It’s just really clever and a crucial moment in the Doctor’s life that you get to explore with the best baddies!  I really think they are going to become another Moffat classic!’

Matt agrees about the ‘baddies’, a brand new enemy known as  the Whisper Men. ‘They’re truly terrifying!’ he tells us, before dropping a couple of hints about what else we can expect from the adventure.  ‘With the 50th this is going to be by far the biggest year in the history of the show.  And the finale is just the start.  It focuses on a pivotal moment in the Doctor’s life and the life of his companion…’

We can at last confirm that the finale will also solve the mystery around ‘the impossible girl’. Having remained tight-lipped about Clara, is Jenna looking forward to being able to talk about her character’s enigma? ‘I am, I can’t wait!’ she admits. ‘All I can say is that Clara hasn’t just met the Doctor three times before…’

Matt nods, but won’t be drawn into saying anything more about the finale. We press him and he finally relents. ‘It’s a complete game changer,’ he concedes with a smile, ‘…and it all starts now!’

Steven Moffat on the Finale, New Monsters and More!

Would You Trust Clara?