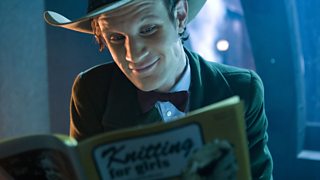 Catching up on some light reading

Update! Many thanks for your thousands of emails. We’ve stopped taking suggestions and have begun to sift through all the figures from history you’d like to meet the Doctor. We’ll be bringing you more news about the story soon!

A few weeks ago we asked you to share your thoughts on which figure from history you’d like the Doctor to meet. We received thousands of replies and have loved reading through your brilliant ideas.

Executive Producer Caro Skinner was so delighted with the response and imagination in your replies that she decided to make it happen! We’ll be asking a Doctor Who writer to write a short story in which the Time Lord meets a figure from history and specifically, one that has been suggested by you!

The Interactive Team will look at every single suggestion and whittle down your ideas but the final decision will be Caro’s. The short story featuring the real life historical person will appear on this site and don’t worry if you’ve not sent us your suggestion yet! There’s still time to let us know who you think should get mixed up in one of the Doctor’s spectacular adventures!

You should read our original feature asking for your ideas and then get your thinking fezzes on! Who do you think the Doctor should bump into when he steps out of the TARDIS..?

Dark Day: What Do You Think Happened?