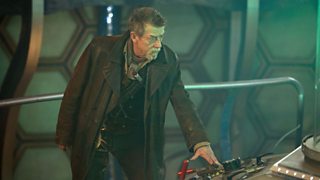 The Doctor Who 50th anniversary special, The Day of the Doctor, will premiere on BBC One on 23 November. But there will be many more shows celebrating the Time Lord’s half century!

Over the past few weeks we’ve released several ‘sneak peeks’ into The Day of the Doctor, including a recent gallery, an awesome poster and even sets of wallpaper to make sure your computer screen looks ready for the big day! And don’t forget we’ve behind the scenes videos of filming at the Tower of London and in Trafalgar Square. Plus, if you want to remind yourself of where we left our hero, you can always view the gripping final moments of The Name of the Doctor.

Other shows marking the 50th anniversary include An Adventure in Space and Time, a marvellous drama written by Mark Gatiss that tells the story of the origins of Doctor Who. You can see a video looking at the making of this special that stars David Bradley (Solomon in Dinosaurs on a Spaceship) as William Hartnell, who played the First Doctor back in the 1960s.

BBC Three will be showing ‘Doctor Who: Monsters and Villains Weekend’ which will reveal the show’s ultimate villain. Don’t forget you can have your say by voting now for which baddies you think should scoop the title!  And for those less familiar with the show, ‘Doctor Who: The Ultimate Guide’ will introduce fans and viewers to a wealth of archive material and act as a guide to the Time Lord’s world.

The Culture Show’s ‘Me, You and Doctor Who’ (1x60mins), explores the cultural significance of the BBC’s longest running TV drama and in another one-hour special, Professor Brian Cox will take an audience on a journey into the wonderful universe of the Doctor, from the lecture hall of the Royal Institution of Great Britain, trying to answer the classic questions raised by the show – can you really travel in time?  Does extra-terrestrial life exist in our galaxy?  And how do you build something as fantastical as the TARDIS?

CBBC brings us a 12 Again Doctor Who special with well-known faces including Sylvester McCoy (the Seventh Doctor), Dan Starkey (Strax), Neve McIntosh (Madame Vastra), Louise Jameson (Leela), Tommy Knight (Luke Smith), Warwick Davis (Porridge) and fans Chris Johnson and impressionist Jon Culshaw sharing their memories of watching Doctor Who when they were young.  Meanwhile, two live Blue Peter specials will see presenters Barney, Lindsey and Radzi joined by aliens and monsters that have sent so many of us scurrying behind the sofa during the last five decades.

BBC Radio 2 will ask ‘Who Is The Doctor?’ in a 90-minute documentary featuring newly recorded interviews and exclusive archive material. David Quantick presents ‘The Blagger’s Guide to Doctor Who’ and over on BBC Radio 1 a 60-minute documentary looks at music inspired by the Doctor. Meanwhile Radio 4 Extra travels back to 1963 with a three hour special programme, ‘Who Made Who?’, to look at the world that inspired the television series.  Additionally, the station will broadcast readings and dramas featuring the Doctor and his companions.

Finally, Graham Norton will be broadcasting his weekly Radio 2 show live (Saturday 23 November, 10am) from the Doctor Who Celebration in London.  In a special three-hour show, Graham will take a ride in the TARDIS and will also be chatting with some of the series’ stars and fans.

There will also be special content across this site and on the iPlayer… so stay tuned!

Doctor Who Trailer to Celebrate the Last 50 Years