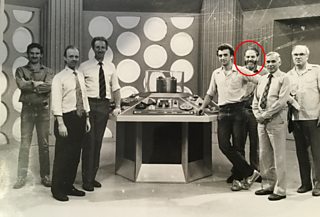 Alec with colleagues, 3rd from right.

It is with great sadness that we report the recent passing of former Senior Camera Operator, Alec Wheal. Alec worked on the majority of Doctor Who stories between Destiny of the Daleks and the Greatest Show in the Galaxy. He was regarded by many as an unsung hero of the show and he remained a fan of Doctor Who until the end.

Alec was a highly skilled camera operator who adapted to the ever changing needs of the TV studio environment and was much loved by the Doctors and companions who worked with him.

Fifth Doctor, Peter Davison said "As the senior Cameraman, Alec Wheal was the rock of the studio recordings of Doctor Who, both during my time, and throughout the seventies and eighties. We developed an understanding, so that in those moments of panic as the clock ticked round to ten pm the end result was always as good as it was”.

9 life lessons from Doctor Who

Send us your questions for The Ultimate Doctor Who Fan Quiz!