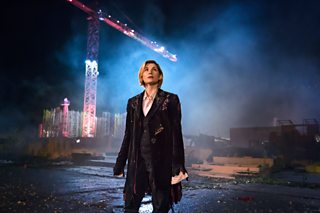 A message from Chris Chibnall:

With people staying home, and families stuck together, I thought maybe a few little presents from Doctor Who might help. Something to read, together or alone. New treats, from the people who make Doctor Who.

We’ll try and post things here once or twice a week. Later this week, we’ll have a never-before-published treat written by Russell T Davies.

To start us off, I’ve written a few words about what went through the Thirteenth Doctor’s head, immediately after she regenerated and was thrown out her TARDIS.

Things She Thought While Falling

The Doctor was cold.

She felt a little peeved that the ragged clothes did not include a built-in parachute. That felt like an error.

Wait, she thought. Why would I want a parachute? Oh yes, that’s right. She remembered.

Also, she was fizzing.

Remnants of regeneration particles were still skittering off her. The process was still… in process. Her newness still in train.

The Doctor looked up, mid-plummet. Oh dear, she thought.

Far above her, the TARDIS was exploding.

That is very unhelpful, she thought.

No, wait, not just exploding. Now the TARDIS was dematerializing – while it exploded. Dematerialexploding, thought the Doctor. That’s not a word, chided the Doctor. Alright, replied the Doctor, I’m only a few minutes in here - you’re lucky I’ve got any words at all. Will you two stop arguing, chimed in the Doctor. Only if you stop sub-dividing us, replied the Doctor, this is all the same brain. Don’t confuse matters.

As the blue box vanished, leaving the Doctor looking up at a starry black sky, the Doctor wondered if she’d ever see her TARDIS again. No time to feel sorry for yourself, she told herself. Too much going on!

Yes, she thought. There was a lot going on. A large dark painful ground mass was rapidly approaching, and inside the Doctor’s body her cells continued to burn and reshape and reform.

Well, thought the Doctor. All of her. This is a conundrum.

Her newly minted mind had already had three thousand and seven thoughts over the course of three seconds. She knew because she counted, and she only realised she’d counted once she’d finished counting, and then she wondered whether the counting made three thousand and eight thoughts and then she realised that the ground was another second closer, and a plan would probably be in order.

She saw the ground and calculated her own velocity. Ooh, this is going to hurt, she thought. Even with a soft landing. And it probably won’t be a soft landing. She crossed her fingers and hoped she was heading for an open air trampoline factory.

Like that planet, what was it called, Fintleborxtug! Fun fact about Fintleborxtug, she told herself, the creature that named it did so when it was hiccuping and just before it was sick. Nobody knows if it was really the name or just the sound it made.

You don’t have to tell me that, thought the Doctor tetchily to herself, I know! I know the planetary surface of Fintleborxtug is as soft and bouncy as a trampoline, because I went for a long bounce there once among the mountains, and the purple sky. I’d just had ice cream sundaes. That was a mistake. Can you please concentrate, the Doctor thought to herself again!

She concentrated. She confirmed she was still falling. Disappointing, but not that much of a surprise given her circumstances hadn’t changed in the second since she last checked.

She wondered where exactly she was. Which sky she was falling through. Which ground she was heading for. She stuck her tongue out. It was buffeted by the air. Tickled. Ah. That tasted like Earth. Northern Europe. Britain. Wood smoke, diesel, grass, fast approaching concrete, lot of moisture and attitude in the air. Yorkshire. Possibly South Yorkshire.

She snuck another look down. A train track. A stationary train. She tried to recognise the livery on the outside of the train, so she could absolutely nail precisely where she was but it was distant and dark and regeneration had once again failed to deliver the super powered, see in the dark, X Ray vision she had always craved. Ah well, she thought, maybe next time.

Now, the train below was insisting on getting even closer. The train, or the tracks, were where she was going to land. She pondered her limited choices - tracks would hurt. Mouth full of gravel and two big metal lines all the way down her new body. Ouch. Train might be better - the roof, if she could crash through it, would soften her landing a bit (though smashing through was most likely going to hurt a lot).

With a bit of luck any injuries would be taken care of by the still fizzing regeneration process. Like those injuries the Doctor had got after he’d crashed through the roof at Naismith manor. Or the hand he’d managed to grow back after the Sycorax had lopped one off. Watch out Doctor, she thought, your personal pronouns are drifting.

That roof was super close now. She flapped her arms a bit to make sure her trajectory was bang on. As she did so, she saw that the train lights were out. She saw sparks of a light flashing in one carriage towards the back of the train. Something was wrong. And if something was wrong, she was the man to sort it out.

You’re assuming you’re going to make it through this fall alive, she reminded herself. Now, don’t be gloomy, she chided back. Things will be alright. Right now, they’re not ideal. But I can muddle through. Probably.

That’s interesting, she thought. I seem to be an optimist. With a hint of enthusiasm. And what’s that warm feeling in my stomach? Ah, I’m kind! Brilliant.

This was going to be fun, thought the Doctor, as she crashed through the roof of a train, on the outskirts of Sheffield, not far from Grindleford.

Then, having hit the floor of the train, and felt extra little regenerative energy particles heal where things had scratched and broken and hurt -- newness, in train, on a train -- she thought to herself: this is going to be a very interesting night!

The Doctor jumped up, zapped a creature she couldn’t quite understand and immediately made new friends.

Festive special will see the return of the Daleks!

Russell T Davies writes a prequel to Doctor Who – Rose.