Coming in the next episode of Doctor Who, the Doctor and friends go on an all-inclusive holiday — into terror.

Plenty of colourful characters will be holidaying with the Doctor, Ryan, Yaz and Graham! Two of the actors playing them, Laura Fraser and James Buckley, revealed more about filming Orphan 55… 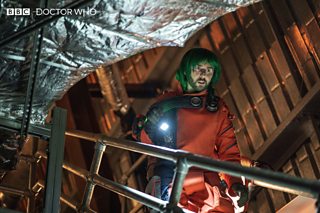 How did it feel to be in Doctor Who?

JAMES: Without sounding dramatic, it’s an honour really. So many great people have been involved in the show. It’s really an honour. The viewers who watch it and how passionate the fans behind the show are is one of the reasons I wanted to do it. I want to be involved in things that people support like they do a sports team, where something is so loved by so many people. Really huge fans, taking the word ‘fan’ back to its actual meaning – fanatical. That was really exciting for me and I obviously hope people enjoy the episode.

LAURA: I was quite nervous because when there’s a show that you've watched as a child that is so iconic and almost out of reach in your head because when you were a kid watching, it just seemed like it would be inconceivable that you could ever actually be on that TV show. It was really exciting. There was so many lovely and funny people and we were travelling around quite a lot to different places in these outrageous costumes and being silly and telling stories and having a laugh.

What was it like working with Jodie and the rest of the cast?

JAMES: Really nice, yeah! It was great. Hanging about with the guys was an absolute pleasure. Really lovely people. Nice people to be around which is what I want to spend my time doing in my life, working with good people and nice people. It made the whole experience great.

LAURA: They were so welcoming. Jodie and everybody - they were so warm and welcoming. I was nervous on my first day and they completely put me at ease. They're just so open. Yeah, it was lovely. 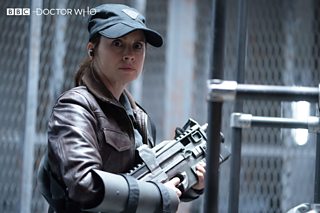 Do you have a particular highlight from filming?

JAMES: I don’t know if I have a particular highlight as I have a lot. For me, it was just really exciting to be on something like this. Usually everything I do is shot in suburban Britain or somewhere like that. As an actor, you want to be on these big sets with fun props, makeup, costumes and things like that. So all those things. It’s sort of why you dream of being an actor as a kid when you do a project like this. I can’t think of one specific thing as it was all of that.

LAURA: There's so many moments I really loved. We were filming abroad and when I saw one of the sets from the outside I was blown away by what they had done. The set designs are amazing. It’s hard to say without revealing anything but I just remember being blown away.

We’ve heard that there are some really scary monsters in this episode, what was this like working with them?

JAMES: It’s all part of the fun and the stuff you dream of as a kid. You just have too much fun with aliens running after you and things like that, it’s great (laughs).

LAURA: I was really impressed with the monsters and the people that operate the monsters too! It's such a funny life isn't it? That their life is to go on all these different sets and be all these kinds of monsters and perform stunts as these monsters - it's totally fascinating.

Do you have a favourite memory from when you were younger about Doctor Who?

LAURA: The music! The theme music is so iconic. Also, all the different doctors and the TARDIS…and I remember once going down to London when I was about 18 for an audition and I met one of the Doctors at the audition. I was just floored, I couldn’t believe it, I was like “it’s the Doctor”! Is there anything particular about the episode you’re excited for viewers to see?

JAMES: For me, personally, just how big it is. It felt like making a big sci-fi movie. There’s special effects, there’s explosions, there’s action, and there’s chasing… I hope people are really going to like the episode.

You can catch James Buckley and Laura Fraser in Orphan 55, opposite Jodie Whittaker, Tosin Cole, Mandip Gill and Bradley Walsh.