Matt Smith announces he is to leave Doctor Who - UPDATED 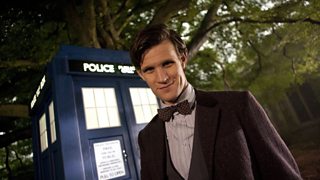 Update! You can now watch Matt Smith’s special message to the fans…

The BBC is today announcing that Matt Smith is to leave Doctor Who after four incredible years on the hit BBC One show. Matt first stepped into the TARDIS in 2010 and will leave the role at the end of this year after starring in the unmissable 50th Anniversary in November and regenerating in the Christmas special. During his time as the Doctor, Matt has reached over 30 million unique UK viewers and his incarnation has seen the show go truly global. He was also the first actor to be nominated for a BAFTA in the role.

Matt quickly won over fans to be voted Best Actor by Readers of Doctor Who Magazine for the 2010 season. He also received a nod for his first series at the National Television Awards, before winning the Most Popular Male Drama Performance award in 2012.

Matt has played one of the biggest roles in TV with over 77 million fans in the UK, USA and Australia alone!

Matt Smith says: "Doctor Who has been the most brilliant experience for me as an actor and a bloke, and that largely is down to the cast, crew and fans of the show. I'm incredibly grateful to all the cast and crew who work tirelessly every day, to realise all the elements of the show and deliver Doctor Who to the audience. Many of them have become good friends and I'm incredibly proud of what we have achieved over the last four years.

Having Steven Moffat as show runner write such varied, funny, mind bending and brilliant scripts has been one of the greatest and most rewarding challenges of my career. It's been a privilege and a treat to work with Steven, he's a good friend and will continue to shape a brilliant world for the Doctor.

The fans of Doctor Who around the world are unlike any other; they dress up, shout louder, know more about the history of the show (and speculate more about the future of the show) in a way that I've never seen before, your dedication is truly remarkable. Thank you so very much for supporting my incarnation of the Time Lord, number Eleven, who I might add is not done yet, I'm back for the 50th anniversary and the Christmas special!

It's been an honour to play this part, to follow the legacy of brilliant actors, and helm the TARDIS for a spell with 'the ginger, the nose and the impossible one'. But when ya gotta go, ya gotta go and Trenzalore calls. Thank you guys. Matt."

Steven Moffat, lead writer and executive producer, says : "Every day, on every episode, in every set of rushes, Matt Smith surprised me: the way he'd turn a line, or spin on his heels, or make something funny, or out of nowhere make me cry, I just never knew what was coming next. The Doctor can be clown and hero, often at the same time, and Matt rose to both challenges magnificently. And even better than that, given the pressures of this extraordinary show, he is one of the nicest and hardest-working people I have ever had the privilege of knowing. Whatever we threw at him - sometimes literally - his behaviour was always worthy of the Doctor.

But great actors always know when it's time for the curtain call, so this Christmas prepare for your hearts to break, as we say goodbye to number Eleven. Thank you Matt - bow ties were never cooler.

Of course, this isn't the end of the story, because now the search begins. Somewhere out there right now - all unknowing, just going about their business - is someone who's about to become the Doctor. A life is going to change, and Doctor Who will be born all over again! After 50 years, that's still so exciting!"

Jenna Coleman, adds: "I could not have imagined coming into the show without Matt as my Doctor, holding my hand, really, quite literally. I totally lucked-out in having a creative, generous, clever, and lovely fella to work alongside day after day.

I feel so privileged to have been part of Matt's reign, to have to been companion to what is and what I think always will be one of our greatest Doctors.

He is so in love with the show, he works tirelessly hard, surprises me every day, always creating and discovering something new about the Doctor. A true gent, a leading man and a very special friend.

I know it will be a very difficult goodbye for me, but I for one can't wait to see where his career takes him next.  And of course with the same welcome I was brought in with, I look forward to welcoming the next Doctor. BUT it's not over till it's over. See ya at the big 5-0!"

Matt's spectacular exit is yet to be revealed and will be kept tightly under wraps. He will return to BBC One screens in the unmissable 50th anniversary episode on Saturday 23rd November 2013 - TUNE IN!

Jenna Coleman is presented to Her Majesty The Queen