Keeley Hawes to Star in Doctor Who 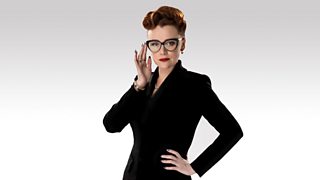 The BBC has issued the following press release:

Line of Duty's Keeley Hawes will join the cast of Doctor Who, following rave reviews for her outstanding performance as DI Lindsay Denton in the hit BBC drama.  Starring opposite the Doctor, Hawes will guest star for one episode in Peter Capaldi's first ever series as the Time Lord.

Set to TX in the autumn this year, Hawes will play Ms Delphox, a powerful out of this world character with a dark secret.  Travelling across space and time the Twelfth Doctor (Peter Capaldi) and his companion, Clara Oswald (Jenna Coleman), will come face to face with the mysterious Ms Delphox when they arrive on a strange and puzzling planet.

Written by Steve Thompson (Sherlock) the episode will be directed by Douglas Mackinnon (Line of Duty, Doctor Who)

'I am delighted to join Doctor Who and to be working with this incredible team.  Ms Delphox is a great character and someone I've had a lot of fun playing.'

‘Anyone watching Jed Mercurio's amazing Line of Duty will know that Keeley Hawes is having one hell of year. And now it's about to get even better as she achieves the greatest villainy yet attempted on Doctor Who: she plays a banker.’

Doctor Who is a BBC Wales production for BBC One.  Filming is currently underway for the new series, which will introduce Peter Capaldi as the next Doctor for the first time to millions of viewers.

A Masterclass with the Man Behind the Monsters

The Sound of Doctor Who