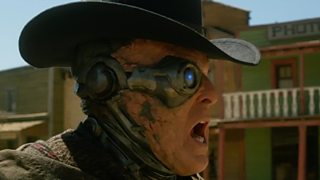 Fast and furious in A Town Called Mercy.

More exciting information is beginning to emerge about the new series. It’s been revealed that episode two will be called Dinosaurs on a Spaceship, with episode three confirmed as A Town Called Mercy.

The official press release went on:

Requiring one of the largest sets to date to house the prehistoric creatures, Dinosaurs on a Spaceship will follow the equally epic Asylum of the Daleks, which kicks-off the show’s highly anticipated return to BBC ONE in the autumn.

Starring Matt Smith as the Doctor, Karen Gillan as Amy and Arthur Darvill as Rory, the episode will also co-star Mark Williams from The Fast Show as Rory’s dad, Brian, and Rupert Graves from Sherlock. Dinosaurs on a Spaceship was written by Chris Chibnall and directed by Saul Metzstein.

The BBC also confirmed today that episode three, filmed on location in Spain, will be a western entitled A Town Called Mercy. Written by Toby Whithouse and again directed by Saul Metzstein, the episode co-stars Adrian Scarborough and Ben Browder.

Steven Moffat, Head Writer and Executive Producer, said: “Dinosaurs on a Spaceship - what more do you need! The Doctor will come face to face with some of the most monstrous creatures evolution has ever produced, on some of the most monstrous sets we've ever built. We took one look at Chris Chibnall's brilliant script and said to ourselves "We're going to need a bigger corridor". And Toby Whithouse's A Town Called Mercy takes us into a genre Doctor Who hasn't attempted since the sixties - it's a full blooded western. We knew from the start we need some serious location shooting for this one, and given the most iconic American setting imaginable, there was only one place to go - Spain."

Both episodes were shot earlier this year and the show returns with a run of five followed by the Christmas special plus a further eight episodes in 2013. We’ll be bringing you all the latest news as it’s confirmed!

The Doctor, the Captain and the Master’s Wife...