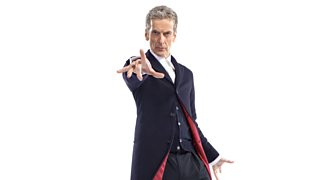 Peter Capaldi is the new Doctor when Doctor Who returns on Saturday, 23 August with a feature-length episode called Deep Breath. In this interview, Peter discusses the iconic role, working with Jenna Coleman and filming his incredible first series…

Question: Can you describe your emotions on the first day when you stepped on set as the Doctor?
Peter Capaldi: I was frightened and excited. My first proper day was stepping out of the TARDIS into a brand new world, which was exactly what was happening to me. Of course being inside the TARDIS you’re just inside a big box really. It’s not bigger on the inside, it’s just a prop and you’re in there with Jenna and a prop man who you’ve never met before. It was all a bit cosy. But it is frightening because you have to take on the challenge of this role, but at the same time it’s exhilarating because you are getting to step out the TARDIS as Doctor Who, and that’s an iconic role and a great position to be in.

Q: How are you feeling ahead of the new series starting?
PC: Apprehensive, excited, and keen.

Q: What have fans got to look forward to this series?
PC: They can look forward to some scary episodes, and some funny ones, and a Doctor who is difficult to keep up with, and who is more alien than perhaps we’ve seen for a while.

Q: Have you received any advice from any of the other Doctors?
PC: Yes Matt and David. We are often in touch, they have been very good. David did take me for a coffee before it had been announced, and he just pointed out to me that I would become more visible and that my life would change in some way.

Q: You are a big Doctor Who fan. Is that an added pressure or an advantage?
PC: Both. It does add to the pressure because you’re hugely aware of how well the role has been played by previous incumbents, but at the same time you have a sort of relationship with it that that doesn’t have to be acted. It’s a knowledge and a closeness to it that takes you a long way down the road. You almost instinctively know what it is. You can recognise what it is and what it should be, because it’s in your DNA.

Q: Have you tried to take any mementos from on set yet?
PC: No I haven’t, I don’t need any mementos – I’m Doctor Who!

Q: What has been the best thing so far about being the Doctor?
PC: It’s working with all of these gifted people, because the crew, the designers and the cast are all so good at what they do. To be working with people who are so great at their jobs is a wonderful thing, and it’s a highly imaginative place to be in the studio when this is all going on. It’s fabulous from the point of view that you’re doing things you would never have done in other television shows. There isn’t another television show like it, where the central character can be blown up, or materialised underneath the sea or be in outer space. So to turn up every time you start a new episode and be submerged in a totally new world is certainly one of the best things about it. To be able to have the privilege of looking after this character for a while is the best thing about it for me. It’s that you’ve been given this very precious thing, and it’s your responsibility to try and keep him aflame until the next person comes along. You’re looking after the character and it looks after you too.

Q: Has there been a sequence you’ve particularly enjoyed filming?
PC: I’ve just been filming a sequence in which I have to be suspended on wires, 20 feet in the air for a whole day, and people kept worrying about me and saying ‘Are you OK? Are you alright?’ But it was fantastic! It was like being nine years old. To be carted up into the air on wires to pretend to fly, I was Doctor Who and Superman. It was absolutely brilliant. You know you’re safe and everyone is there looking after you. Where else is a man of my age going to be attached to wires and flung around a room? I think being on the wires is great fun.

Q: How do you feel about being the joint oldest Doctor?
PC: I think you learn to pace yourself and you recognise the dangers. Everybody counselled me about how physical the role is, but that’s great! It’s like exercise, you don’t have to go to the gym. You just come and play Doctor Who and run up and down corridors being chased by monsters, and run away from explosions. It keeps you fit, but obviously when you’ve been around the block a little bit like I have, you can actually say ‘I’m not running over that thing over there, that looks too dangerous.’ You can pace yourself more, and that’s what I’ve done. So touch wood we’re nearly there, and I’m surrounded by a great team who look after me. I think too much is made of my age, who cares? Doctor Who is over 2000 years old…

Q: What sort of response have you had from Doctor Who fans so far?
PC: My relationship with fans, either when I’ve met them or when they’ve written to me, that’s all been wonderful and kind and positive. It’s a delightful thing when people are pleased to meet Doctor Who, because Doctor Who is far more interesting than I am. So I get his smiles. The welcome look on people’s faces is because they’re meeting Doctor Who, not me. The fans have been wonderful, those that I’ve met. I’m not a creature of the internet, so I’m not out there finding out what people are saying, but I hope we will meet a lot more people. Especially with the world tour I’m going to meet lots of people. But genuinely the fans I have met have been very positive and a great support to me. That’s lovely. I know what Doctor Who fans are like because I am a Doctor Who fan myself. They’re good people.

Q: Are you looking forward to the audience reaction?
PC: It depends what it is. That’s the truth. It depends if they like me or not. The thing I do know because I’m a fan of Doctor Who is that if there are a lot of people who don’t like me, there will also be some people who really like me, and that’s quite a nice feeling. That’s the nature of the show. People will take sides.

Q: How has it been having Jenna on set to share the experience with?
PC: She’s great. Jenna has been absolutely brilliant.  I think she’s wonderful in the show, and she’s my favourite companion. She’s been so welcoming to me and so warm. I couldn’t have wished for anyone better to welcome me to the show. She’s just been delightful to work with, so I hope we can carry on doing that.

See Peter Capaldi in the latest trailers and teasers!