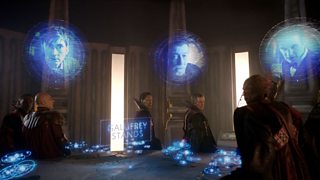 Doctor Who: The Day of the Doctor has been nominated in the ‘Best of British’ category in the Freesat Free TV Awards. This latest accolade makes it a great month for the 50th anniversary special which received a BAFTA TV nomination earlier this week!

The Freesat Awards’ ‘Best of British’ category exists to celebrate ‘the absolute best programme or series on the UK’s free-to-air TV channels’. The winner will be decided by a panel of industry experts and announced at a ceremony on the 17 June, 2014.

Good luck to everybody involved!

Ben Miller to Guest Star in Doctor Who