Russell T Davies writes a prequel to Doctor Who – Rose. 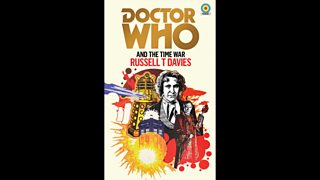 Fans around the world will be remembering and reminiscing this anniversary with a live stream of Rose, with many using the hashtag #TripofaLifetime to chat on Twitter (including showrunner and writer of Rose Russell T Davies himself!). Why not join in from 7pm GMT? All episodes from Series 1 to 12 of Doctor Who are available to watch now on BBC iPlayer.

To celebrate this, and to unite fans of Doctor Who around the world, Russell T Davies has written an introduction and provided this prequel to Rose.

This was never meant to exist.

Way back, maybe early 2013, Tom Spilsbury, the editor of Doctor Who Magazine, asked me if I wanted to contribute to DWM’s great 50th special. Maybe addressing that huge gap in Doctor Who lore, how did the Eighth Doctor regenerate into the Ninth?

I said well, yeah, no, but, isn’t that best left to the imagination? If I write a script, it would be too real, too fixed, too canonical. But Tom’s never one to give up. He said okay, what if you wrote, say, the final pages of a Target novel? About the last days of the Time War. The Doctor’s final moments. And we could present it like a surviving fragment of the Novel That Never Was, so it exists in that half-real space of the spin-offs, possible but not factual, just slightly canon, if you so choose. Okay, Tom. You temptress. I’m in.

So I wrote this. It even starts mid-sentence, as if you’ve just turned to the last pages. Lee Binding created a beautiful cover. We were excited! And then Tom said, I’d better run this past Steven Moffat, just in case…

Oh, said Steven. Oh. How could we have known? That the Day of the Doctor would have an extra Doctor, a War Doctor? And Steven didn’t even tell us about Night of the Doctor, he kept that regeneration a complete surprise! He just said, sorry, can you lay off that whole area? I agreed, harrumphed, went to bed and told him he was sleeping on the settee that night.

So the idea was snuffed a-borning. Until 2020. When a science fiction-shaped virus came along to change our lives (honestly, I’ve written the end of the world 100 times, but I never imagined everyone just sitting at home). Emily Cook of DWM created the livestream Day of the Doctor, then turned to Rose, and asked me if I had anything to offer..? At exactly the same time, Chris Chibnall emailed me, saying we need the Doctor more than ever these days, and could I think of any material?

By some miracle this file still existed. Lee still had his illustration (naturally, because he was under a Binding contract, oh I’m so funny). And strangely, looking back, it’s funny how things fit; the Moment is described here as oak and brass, which isn’t far from the final idea (I don’t mean Billie). I wonder; I suspect, without realising, if Steven and I were both riffing off Eighth Doctor-style designs, maybe..? More importantly, the idea has come of age. This chapter only died because it became, continuity-wise, incorrect. But now, the Thirteenth Doctor has shown us Doctors galore, with infinite possibilities.

All Doctors exist. All stories are true. So come with me now, to the distant reefs of a terrible war, as the Doctor takes the Moment and changes both the universe and themselves forever…

Doctor Who and The Time War - Russell T Davies

but the Daleks and the Time Lords scream in vain, too far away to stop him now. And so the Doctor stands alone.

He looks out from his eyrie, across the wreckage of a thousand worlds. Below him, fragments of the Time War, broken reefs of Gallifrey and Skaro washed up into this backwater, to rot. His creaking wooden platform shivers with ice, a mile high, atop fragments of Morbius’s Red Capitol, its vile towers fused into the black, friable spires of Yarvelling’s Church. And yet the Doctor can see glimpses of Earth. The planet had been replicated a million times, to become the bullets fired into the Nightmare Child’s skull, and now splinters of human society have gouged themselves into the wasteland below - relics of Mumbai, shards of Manhattan, a satire of Old London Town. Remnants of better days.

In front of him, at the edge of the platform, a brass handle, mounted in a simple oak casement; the only remaining extrusion of the Moment into this world, the rest of its vast bulk hidden, chained to an N-form, churning behind the dimensional wall. Screaming to be used.

He steps forward. He grips the handle. He wonders what his last words should be. He decides that last words are useless. He pulls the handle down, flat.

Surrounded by brightness, the Doctor sees the sky above parting to reveal, just as Bettan and the Deathsmiths of Goth had predicted, the final event.

Gallifrey Original convulses and rolls into flame. Its concentric rings of Dalek warships become silhouettes, then ashes, and then –

The Doctor falls. Every atom around him is sucked upwards, towards the fire, but he alone is capable of falling, saved – or damned – by the Moment’s shadow. Above him, he feels the Time Lock solidify, sealing off the war from reality, and as his body tumbles out of existence, into plasmaspace, then foulspace, then beyond, the Doctor leans into the fall, head first, arms wide, diving into infinity.

A whirl of blue. That faithful blue. Then a rectangle of white, widening, a doorway, coming closer, towards him, and as the grind of ancient engines reaches a crescendo, he thinks: I’m going home.

The Doctor lies on the Tardis floor. His bones broken from the fall, his hearts hollowed by his loss. Around him, the console room buckles, warps, shudders, still suffering from the High Council’s resurrection of the Master, long ago. It aches for a new shape. “Me too,” mutters the Doctor with a grim smile, though he knows regeneration is impossible. The Moment has fixed his existence, and this life is his last.

He wonders what age he’s finally reached. The Time War used years as ammunition; at the Battle of Rodan’s Wedding alone, he’d aged to five million and then regressed to a mewling babe, merely from shrapnel. Now, the ache in his bones feels… one thousand years old? Well. Call it nine hundred. Sounds better.

Darkness swills through his mind and he forces a smile, ready and yet never ready for the end. Still, no final words.

He feels it once more.

That old, deep stirring in every bone and muscle and thought. The joy. The terror. The change, the impossible change!

Amazed, he lifts up his hand. Stares, fascinated, as the skin ripples with a curious new gold.

Of course. She tricked him, right at the end. Her final kiss was not a goodbye; she imprinted the Restoration within him. His lifecycle has been reset, the new man lurching outwards to be born. So this is the meaning of her final song: a whole new body to expiate the guilt. He might even pass the Restoration to another, one day.

Suddenly, they come, in a rush, his final words. He says them aloud, but there is no one to hear, allowing them to be imagined and imagined again for ever.

Then his nuclei turn into stars. Every pore blazes with light. A volcano of thick, viscous energy cannons from his neck, his hands, his feet, his guts, his hearts, his soul - It stops.

The Doctor sits up. The new Doctor, next Doctor, now Doctor. He lifts up his new fingers to touch his new head. His new chin. His new nose. His new ears. He takes a deep breath into his new, dry, wide lungs. He says his first word.

Make sure you press play from 7pm GMT to watch Rose with Doctor Who fans all over the world, to celebrate 15 years since the return of Doctor Who.