Steven Moffat on The Night Of The Doctor 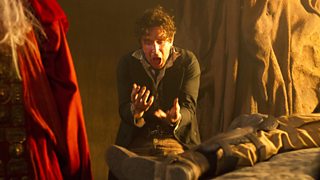 The Night Of The Doctor is the new mini episode featuring the return of the Eighth Doctor… You can watch the adventure here! We caught up with its writer, Steven Moffat, and asked him about the Time War, the Sisterhood of Karn and of course, the return of Paul McGann! Contains spoilers…


Question: How did The Night of the Doctor come about?

Steven Moffat: Well, we had our new ‘hidden mystery’ Doctor and I was thinking, what else can we do for our anniversary year… I thought… Why don’t we get Paul McGann in and regenerate him into John Hurt? I’d like to see that! I’d love to see that! And we had this possibility that we could do it as a surprise, so we got in touch with Paul who was dead keen and I’m delighted to say he was so happy to join in with the idea of keeping it secret. He was childishly excited about it!

Paul came along and shot it - it was the last two days of the shoot for the fiftieth, actually. He did a wonderful job. It was great! We designed a new costume for him based on his old one. Howard Burden did a fantastic job with that.


Q: It was a well-kept secret! How important was that for you, and what measures did you go to, to ensure this regeneration was kept under wraps?

SM: We were phenomenally secret with the making of it! And I’m sure some people are a bit cross that we were so secretive but the fact is, there is only one way to ensure you keep a secret, and that’s to keep it! So, we kept it very tight and we hope it all came as great surprise to everyone.


Q: For those that don’t know him, could you describe the Eighth Doctor?

SM: The Eighth Doctor is perhaps the first of the sexy, romantic Doctors. I don’t mean he’s the first sexy Doctor – he’s not. But he’s the first one who kisses a lady, for example. He’s obviously dashing, terribly handsome and quite romantic. I always found it hard to imagine him fighting in the Time War. I’d always imagined the ‘Time War Doctor’ would be more grizzled, somehow, you know?

Paul only played the Doctor onscreen once before, in the TV Movie. He gives a wonderful performance in it. It’s a terrifically exuberant performance and it anticipates the later performances, particularly of Matt and David. He’s a dashing, romantic, very funny and very affecting Doctor! Of course, Paul is not only known for the telemovie but for all his wonderful audio adventures. I'm always telling the Doctors and companions, as they come through the show, that they'll never be quite done with it - Big Finish is expecting them.


Q: It’s an interesting spin on the Time War – the Time Lords becoming this hated race, as bad as the Daleks in some people’s eyes. Will we see that play out with John Hurt’s Doctor and so on?

SM: We will see some of that play out. We’ve already seen some of it play out on the show, in The End of Time, where the Doctor reveals the Time Lords got as bad as the Daleks towards the end, and he was as worried by them as anything else. And we know the Doctor wiped out his own people. He wouldn’t do so unless things had got pretty bad. Genocide is a big decision for anyone!


Q: People seemed delighted when they heard the Sisterhood of Karn was returning. Did that surprise you?

SM: A little bit! I was terribly excited about having the Sisterhood of Karn coming back which is why I did it! But I should probably learn to have a little more faith in the fact that what gets me excited as a sad, old fan will get other people excited as well! And okay, the Sisterhood are unknown to the kids, but I was a kid when I first saw the Sisterhood and I thought they were great! So I’m hoping other people will like them!


Q: And the character the Doctor encounters in the mini episode… Is that supposed to be Ohica, from The Brain of Morbius?

SM: No! If you look at the credits you’ll see I called her Ohila so it suggests she’s in some way connected to Ohica. Instead of having that confusion in having it the same person, I thought we’d just imply they were connected.


Q: Finally, running a show like Doctor Who is always going to be hard work… But how much fun was it? Bringing back the Eighth Doctor?

SM: Oh, it was a complete treat! It was always frustrating that we never got to see more of him! The completist in me… the ‘box set man’ in me wants every box ticked and I wanted every regeneration scene! And we get to see the Paul McGann Doctor regenerate into the John Hurt Doctor! I love regeneration episodes – there’s nothing more exciting! And in the anniversary year we get to see two regenerations… That’s pretty cool!

An Adventure in Space and Time: 'A Wonderful Tribute'